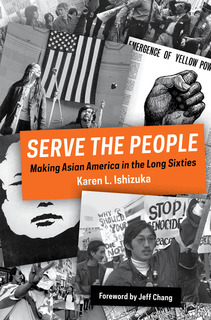 Serve the People: Making Asian America in the Long Sixties

Sold out
Add to Cart
A narrative history of the movement that turned “Orientals” into Asian Americans.

Until the political ferment of the Long Sixties, there were no Asian Americans. There were only isolated communities of mostly Chinese, Japanese, and Filipinos lumped together as “Orientals.” Serve the People tells the story of the social and cultural movement that knit these disparate communities into a political identity, the history of how—and why—the double consciousness of Asian America came to be.

At the same time, Karen Ishizuka’s vivid narrative reveals the personal epiphanies and intimate stories of insurgent movers and shakers and ground-level activists alike. Drawing on more than 120 interviews and illustrated with striking images from guerrilla movement publications, the book evokes the feeling of growing up alien in a society rendered in black and white, and recalls the intricate memories and meanings of the Asian American movement. Serve the People paints a panoramic landscape of a radical time, and is destined to become the definitive history of the making of Asian America.