Dr. Jenny Wang joins Eastwind Books for an evening of conversation on her new book, Permission to Come Home: Reclaiming Mental Health as Asian Americans. We’ll be joined by Michelle Yiu from UC Berkeley’s Asian American Pacific Islander Health Research Group (AAPIHRG), who will engage Dr. Wang in a crucial and intimate conversation about the unique experiences of mental health across the Asian diaspora and immigrant communities.

This is a hybrid in-store and virtual event. The talk will take place at Eastwind Books of Berkeley, and live streamed onto Youtube here: https://youtu.be/tO7YRv7_4gU. In-person audience members are required to bring proof of vaccination or proof of a negative COVID test taken within the last 72 hours prior to the event. Masks will be required inside.

About the Book:
Asian Americans are experiencing a racial reckoning regarding their identity, inspiring them to radically reconsider the cultural frameworks that enabled their assimilation into American culture. As Asian Americans investigate the personal and societal effects of longstanding cultural narratives suggesting they take up as little space as possible, their mental health becomes critically important. Yet despite the fact that over 18 million people of Asian descent live in the United States today — 5.6 percent of the population — they are the racial group least likely to seek out mental health services.

Permission to Come Home confronts and destabilizes the stigma Asian Americans face in caring for their mental health. Weaving her personal narrative as a Taiwanese American and insights as a clinician with evidenced-based tools, Dr. Jenny T. Wang offers readers permission to embrace their mental and emotional self-care while understanding and honoring the richness of their heritage and embodying a new, complete identity. In ten chapters, each one focusing on a central theme—from recognizing emotions, to establishing boundaries, managing anger, and introducing play into one’s life—Dr. Wang presents a road map for the journey to wholeness.

This is a hybrid in-store and virtual event. The talk will take place at Eastwind Books of Berkeley, and live streamed onto Youtube here: https://youtu.be/G0p79PiDLUU. In-person audience members are required to bring proof of vaccination or proof of a negative COVID test taken within the last 72 hours prior to the event. Masks will be required inside.

About the Book:
A Rebel’s Outcry: Biography of Issei Civil Rights Leader Sei Fujii (1882-1954) is an illustrated biography and detailed look into the life of Japanese American civil rights leader Sei Fujii, known for overturning the California Alien Land Law in 1952 and founding the Japanese American newspaper Kashu Mainichi (California Daily News). His complex history reveals his intriguing journey as an immigrant, a social justice activist, unionizer, and a community leader. Fujii’s story exemplifies the multitude of ways Americans have and may continue to fight for our civil rights.

The official biography on Sei Fujii is the source material written by author Kenichi Sato and was commissioned by manager Junko Maruya of the Kashu Mainichi. Following the work by Sato, LTHS conducted over ten years of extensive research, including interviews with countless community members, Fujii’s family, and visiting his ancestral samurai home in the Takamori Village of Iwakuni, Japan. Publication of this book is sponsored by Union Bank and UCLA Asian American Studies Center and the George and Sakaye Aratani Community Advancement Research Endowment.

About the Speakers:
Filmmaker Jeffrey Gee Chin is an MFA alumnus of University of Southern California School of Cinematic Arts and honors graduate of University of California at Berkeley Film Studies. His mission is to share the untold stories of immigrant pioneers who have changed the fabric of the United States. His activism began in his youth, when he documented the stories at China Camp State Park and Angel Island Immigration Station, he was later mentored by Director John Singleton. He is currently supervising a television in San Francisco while developing his future productions.

Chris Tashima has been working in independent film for over 35 years. He won an Oscar® for Visas and Virtue, a short film he directed and stars in, as Holocaust rescuer Chiune Sugihara. He appeared in Under the Blood Red Sun, adapted from Graham Salisbury's young adult novel, and in Stacey Hayashi's Go For Broke, telling of the formation of WWII’s famed 442nd Regimental Combat Team. He was honored to play Sei Fujii in Jeffrey Gee Chin's historical short film, Lil Tokyo Reporter, and is excited to now see Fujii's full life-story being told with the publication of "A Rebel's Outcry."

Harvey Dong  teaches Ethnic Studies courses as a lecturer in Ethnic Studies and Asian American and Asian Diaspora Studies at UC Berkeley. Initially, Dr. Dong took part in the 1969 Third World Liberation Front, a student movement to establish Ethnic Studies. Once Ethnic Studies was established, Dr. Dong taught some of the department’s first communities issues courses based on extensive fieldwork carried out in San Francisco Manilatown and Chinatown, while also active in struggles to save the International Hotel in Manilatown and to protect Asian immigrant labor rights. Dr. Dong studies the history of social movements and activism in Asian American communities and grassroots movements for social change.

Join us for a special online event on Friday June 10th at noon. Peter Bacho, author of Uncle Rico's Encore: Mostly True Stories of Filipino Seattle  will be in conversation with friend and distinguished scholar activist Juanita Tamayo Lott. Together they will recount the stories of growing up as youth with the manong generation's influence.
​
About the Book:
From the 1950s through the 1970s, blue-collar Filipino Americans, or Pinoys, lived a hardscrabble existence. Immigrant parents endured blatant racism, sporadic violence, and poverty while their US-born children faced more subtle forms of racism, such as the low expectations of teachers and counselors in the public school system.
​
In this collection of autobiographical essays, acclaimed novelist and short-story writer Peter Bacho centers the experiences of the Pinoy generation that grew up in Seattle's multiethnic neighborhoods, from the Central Area to Beacon Hill to Rainier Valley. He recounts intimate moments of everyday life: fishing with marshmallows at Madison Beach, playing bruising games of basketball at Madrona Park, and celebrating with his uncles in Chinatown as hundreds of workers returned from Alaska canneries in the fall. He also relates vivid stories of defiance and activism, including resistance to the union-busting efforts of the federal government in the 1950s and organizing for decent housing and services for elders in the 1970s.
Sharing a life inextricably connected to his community and the generation that came before him, this memoir is a tribute to Filipino Seattle.


About the Speakers:
Peter Bacho is the author of seven books: Cebu, Dark Blue Suit, Boxing in Black and White, Nelson's Run, Entrys, Leaving Yesler , and Uncle Rico’s Encore. His books have received several awards, including the 1992 American Book Award. He is an adjunct professor at The Evergreen State College Tacoma Campus. Bacho was born in Seattle, Washington and grew up in Seattle’s Central District.
As a child Bacho lived with his immigrant parents in migrant worker camps, traveling from harvest to harvest. Much of his youth was spent in Seattle’s blue collar and multiethnic Central District, a place of hard lives and tough times. He was the first in his family to graduate from high school, then college and finally law school. These experiences continue to inform his writing. 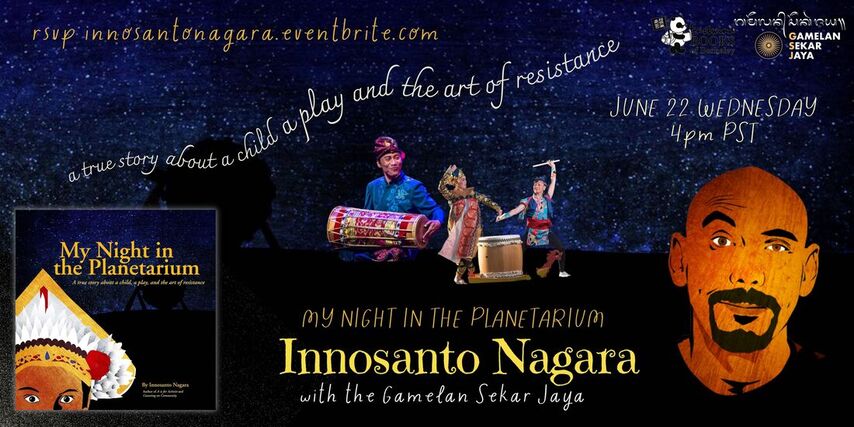 Innosanto Nagara, esteemed author, illustrator, and activist joins us at Eastwind Books for an exciting afternoon of Indonesian culture! Nagara will be reading from his book My Night in the Planetarium while accompanied by live Indonesian music from a trio ensemble from the Gamelan Sekar Jaya!
​
About the Book:
“When I was seven, I got to spend the night in a planetarium.”

Indonesia, 1977.
Seven-year-old Innosanto spends a night with his mom sleeping under the stars in the Jakarta Planetarium. Innosanto’s father is a playwright and the boy memorizes lines during the actors’ rehearsals, so they invite him to join the performance, which tours the country. The play is about a General, who doesn’t treat people very well, “so they decided to do a play about how that was wrong.” Fact: Indonesia, aka The Spice Islands, is the place Christopher Columbus was looking for when he crashed in the New World. Fact: Indonesia is made up of 17000 islands where people speak over 750 different languages. Fact: when Inno was a child, speaking out against the government could land you in jail. On the last night of the performace Inno packs a toothbrush (“they figured if you’re going to go to jail for a long time, you may as well have your toothbrush with you so you can keep your teeth clean. (true story).”), the curtains go down, and with soldiers on the way, the actors scatter into hiding. On its surface, My Night in the Planetarium is a modern Indonesian children’s story about one night in the late ’70s that the author got to spend in the Jakarta planetarium. But it’s actually much more than that. It’s an introduction to the history and culture of Indonesia. It’s about colonialism, revolution, how power corrupts, and how through art and solidarity liberation can be won.

About the Author and Contributors

Innosanto Nagara was born and raised in Jakarta, Indonesia, and moved to the U.S. in 1988 to study zoology at UC Davis. But instead of becoming a zoologist he became an activist and a graphic designer. He also writes and illustrates social justice themed children’s books.

Gamelan Sekar Jaya (GSJ) fosters artistic exchange between Bali and the United States through residencies, workshops, performances, and the creation of innovative new works for music and dance. Founded in 1979, the company is based in the San Francisco Bay Area and specializes in the performing arts of Bali. GSJ has been called “the finest Balinese gamelan outside of Indonesia” by Indonesia’s Tempo Magazine, and the group has performed in venues ranging from New York’s Symphony Space to LA’s Hollywood Bowl to remote village squares in Bali.