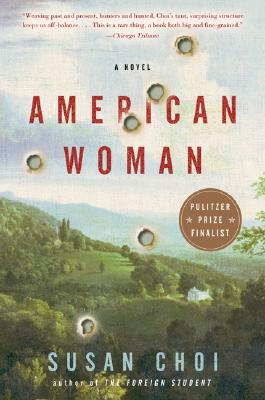 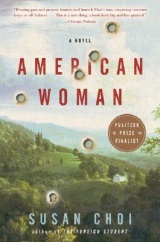 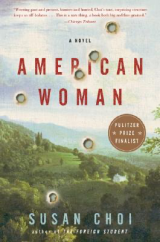 Sold out
Add to Cart
Synopsis:
On the lam for an act of violence against the American government, twenty-five-year-old Jenny Shimada agrees to care for three younger fugitives whom a shadowy figure from her former radical life has spirited out of California. One of them, the kidnapped granddaughter of a wealthy newspaper magnate in San Francisco, has become a national celebrity for embracing her captors' ideology and joining their revolutionary cell.

A thought-provoking meditation on themes of race, identity, and class, American Woman explores the psychology of the young radicals, the intensity of their isolated existence, and the paranoia and fear that undermine their ideals.

About the Author
Susan Choi was born in Indiana and grew up in Texas. Her first novel, The Foreign Student, won the Asian-American Literary Award for Fiction and was a finalist for the Discover Great New Writers Award at Barnes & Noble. With David Remnick, she edited an anthology of fiction entitled Wonderful Town: New York Stories from the New Yorker. She lives in Brooklyn, New York.


Reviews
"While the unfolding drama...is enthralling, it is Choi's skill at getting inside the heads of her protagonists that gives the novel its particular, unsettling appeal....Sounding the depths of her conflicted protagonists, Choi takes an uncompromising look at issues of race, class, war and peace."
Publishers Weekly, 06/2/2003

"Susan Choi...proves herself a natural--a writer whose intelligence and historical awareness effortlessly serve a breathtaking narrative ability. I couldn't put American Woman down, and wanted when I finished it to do nothing but read it again." --Joan Didion

A novel of impressive scope and complexity, "American Woman is a thoughtful, meditative interrogation of...history and politics, of power and racism, and finally, of radicalism." (San Francisco Chronicle), perfect for readers who love Emma Cline's novel, The Girls

"With uncompromising grace and mastery, Susan Choi renders the intimate moments which bring to life a tale of prodigious sweep."--Jhumpa Lahiri*

"A brilliant read ... astonishing in its honesty and confidence AMERICAN WOMAN is a haunting book."--Denver Post

"AMERICAN WOMAN with its historical acuity and sprawling interior intimacy further confirms that Susan Choi is a writer of scope, ambition and undeniable talent."--San Francisco Chronicle

"In the manner of Don DeLillo's Libra or Joyce Carol Oates in Black Water...[Choi] takes us straight into one of the strangest segments of our ever surreal American dream life."--Sven Birkerts, New York Times Book Review

"Extraordinary generosity and grace .... the author, perhaps as successfully and as powerfully as anyone has, makes us understand how it felt, what it was like ...[an] assured, accomplished work."--San Diego Union-Tribune

"Masterfully plotted ....AMERICAN WOMAN is that rarest of creations, a political novel that gives equal weight to its characters' inner and outer lives."--Laura Miller, Salon

"Susan Choi in this second novel proves herself a natural--a writer whose intelligence and historical awareness effortlessly serve a breathtaking narrative ability. I couldn't put American Woman down, and wanted when I finished it to do nothing but read it again."--Joan Didion

"An amazing sense of control ...[and] a compelling exactness...fantasy confronts fantasy in the confusion that gives rise to love, to hatred, to politics. And to gunshots."--Jay Cantor, Los Angeles Times

"[AMERICAN WOMAN] takes a hard-eyed look at American idealism, and yet its imaginative abundance its fascination with self invention and its portrayal of the landscape as a living, breathing presence provide a quintessentially American sense of possibility."--The New Yorker

"Enthralling, it is Choi's skill at getting inside the heads of her protagonists that gives the novel its particular, unsettling appeal [and] ... grainy psychological depth and texture."--Publishers Weekly
"A hypnotic, winding route through the scorched emotional landscape of 1974 ... Choi's prose radiates intelligence as she traces circles around Jenny and Pauline - near enough that you can feel their warmth, but not so close that you'd ever nail them down."--Joy Press, Village Voice

"Riveting ... Choi has the rare gift of bringing such notorious moments of history back to life and making them altogether new."--Vogue

"What I find so genuinely exhilarating about Choi's project is her old-fashioned intrepidness, her desire to plunder history without apology in order to recover its heart."--Minna Proctor, BookForum
​
"An artful, insightful meditation on the radical impulse ... Jenny's wrenching struggle to come to terms with what she's done makes the book resonate with compassion and regret .... [AMERICAN WOMAN] is a complex and layered work."--Dan Cryer, Newsday