Add to Cart
The 2008 economic crisis and global backdrop of struggles by 2011 renewed possibilities for thinking totality, materializing it for apprehension. Ang wrote The Totality Cantos out of a desire to be interested in everything, sampling from discourses of history, philosophy, religion, science, and the humanities, all offering knowledges of what constitute totality. This major work is constructed along the principles of assemblage poetics, and exemplifies constructive verse: writing adequate to apprehending totality.

totalitycantos.net includes the complete, searchable text in order to find words of interest and a generator that randomizes assemblages of its one thousand sections.

The Totality Cantos: Brian Ang and Alex Abalos on the Avant-Garde: livestream recording and other materials. 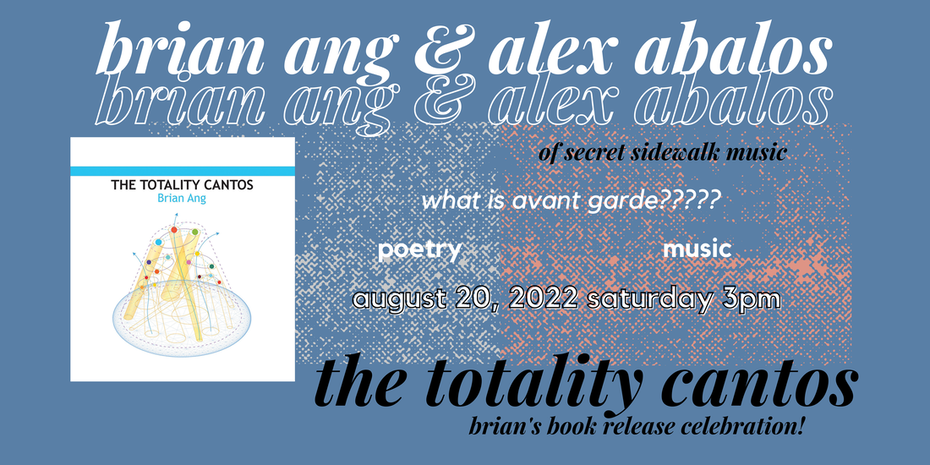 Cheryl Truong: Let’s start from the beginning.
​
Brian Ang: I started writing poetry at the University of California, Davis in 2006. My influences include avant-garde poetry and music and radical politics. I educated myself at the library and radio station. Participating in student political movements and studying political theory gave a political desire to my writing. After finishing at UC Davis, I moved to the San Francisco Bay Area in 2010 to get more involved in its poetry and political scenes.

CT: I was maybe 8 or 9 when the financial crisis of 2008 happened. The Totality Cantos was written in the context of that immense period of lack―a time of no jobs that turned into negative jobs, etc. People adopted practices of frugality, obsessive conservation and rationing as everyone everywhere was losing virtually everything. What I find so interesting about The Totality Cantos is how inspired it is despite being an effect of this backdrop of economic crisis and global struggles of the early 2000’s. In a time of economic deficit, you saw renewed possibility for “thinking totality, materializing it for apprehension”―instead of giving in to scarcity, you saw abundance. Your book was written out of this ambitious desire to learn and know everything. Where did this desire come from? Was there a sense of urgency when writing this book? How did you find this spirit of hope in such darkness? How do we seek abundance when we are so “infrastructurally” limited?

BA: The 2008 economic crisis and global backdrop of struggles by 2011 renewed possibilities for thinking totality in that they questioned how it could be organized otherwise. I wrote The Totality Cantos from the desire to be interested in everything. This desire came from my sense of what was possible in writing connected to my sense of totality. I had a sense of urgency writing the book in that it was the greatest thought I could think of and moved toward it. The spirit was political, looking for new weapons everywhere. Scarcity and abundance relate to sense. Totality’s organizations of power, including economic infrastructural ones, define dominant forms of sense. Writing can contribute to shaping sense, including counter forms of sense. It can contribute to apprehending totality, materialized by crisis and struggles, both seeing and seizing it. It can contribute to seeing what is and how that could be reassembled otherwise.

CT: We now face the opposite scenario. Post-COVID-19, we are experiencing massive inflation while we watch massive profits being reaped by corporations. Do you think there’s possibility for thinking totality in our contemporary world? Would you approach it the same way? Do you think the current times are changing the way you write, phrase?

BA: Thinking totality continues to be important as it continues to change. My writing The Totality Cantos was conditioned by its history, so writing totality now would be different. Current times change the way I write in how my methods developed in time encounter the changing present.

CT: As culture moves through time, you can point to one tendency and say, “that’s what’s going on.” But often, at the same time, the opposite tendency is happening, too. Many times when you are asked what kind of poetry you write, you kind of cock your head a little and in an attempt to categorize your work into a convenient designation, you say “avant-garde??”. As we discussed in the questions above how political/economic/social climates impact your work, I’m curious to know what “avant-garde” means to you?

BA: Avant-garde means opening new possibilities. I’m not satisfied with the way things are, so that’s a permanent task.

CT: Something that really struck me when reading your book is your acute approach to words. Your expression feels painfully precise; like you were constantly tinkering. You’ve already set a limit on yourself with the technical structure of the poems―it felt like every single word was just as important as the next, deserving of its slot of the 55,000 words you have set for your entire book, as though you seemed to be striving for a kind of equal strength with all of your words.  People think of writing as a narrative with some sort of arc. Some parts being obviously the highs and others the tapering off of that―some sort of climax, that a-ha part of your poems. As I read your poems I thought maybe that wasn’t the case for you. Maybe you wanted everything to be essentially on the same plane? Did this involve a lot of editing on your part, picking apart the words?

BA: I wanted every word, line, section, and canto in The Totality Cantos to be interesting. The poem is a continuous middle. There was a lot of process but little editing. Three hundred discourses were drawn from. Fifty-five thousand samples were gathered, the number of words in the poem. I read a book on every sampled discourse which honed my writing’s improvisation with samples. Words were considered for their meanings and the discourses they are parts of and connected by resonances and rhythms. Process gave the poem objectivity.

CT: How’d you get to Eastwind?

BA: When I moved to the Bay, it was difficult to find work after the economic crisis and I worked random jobs. Eventually I heard about Eastwind Books, which appealed to me as an Asian American bookstore, and I joined in 2012. Through Eastwind I’ve enjoyed being surrounded by books, getting to know great people, and learning more about Asian American things.

CT: What is your last meal on the earth?

BA: Chinese banquet with loved ones.

BA: The Totality Cantos introduces “assemblage poetics”: “Assemblage poetics, constructive verse, writing adequate to apprehending totality.” My piece “Assemblage Poetics,” forthcoming in Rabbit: a journal for nonfiction poetry, begins to elaborate that. Now that I’ve written The Totality Cantos, I’m interested in writing about multiplicities that constitute totality. I’m writing my next book of poetry, A Thousand Records, open to the totality of music.