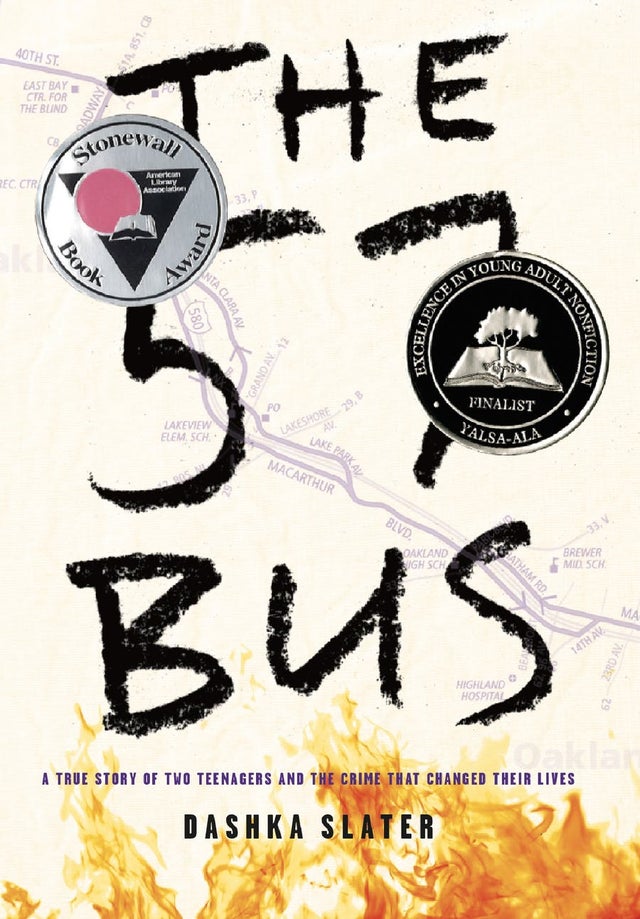 The 57 Bus: A True Story of Two Teenagers and the Crime That Changed Their Lives (Hardcover)

Title: The 57 Bus: A True Story of Two Teenagers and the Crime That Changed Their Lives

Sold out
Add to Cart
Description
One teenager in a skirt.
One teenager with a lighter.
One moment that changes both of their lives forever.

If it weren't for the 57 bus, Sasha and Richard never would have met. Both were high school students from Oakland, California, one of the most diverse cities in the country, but they inhabited different worlds. Sasha, a white teen, lived in the middle-class foothills and attended a small private school. Richard, a black teen, lived in the crime-plagued flatlands and attended a large public one. Each day, their paths overlapped for a mere eight minutes. But one afternoon on the bus ride home from school, a single reckless act left Sasha severely burned, and Richard charged with two hate crimes and facing life imprisonment. The case garnered international attention, thrusting both teenagers into the spotlight.

Contributor:
Dashka Slater is the New York Times-bestselling author of The 57 Bus, which won the Stonewall Book Award and was a YALSA nonfiction finalist . Her fiction includes The Book of Fatal Errors which was an Amazon Best book of the Month, the picture book Escargot, which won the Wanda Gag Book Award; Baby Shoes; The Antlered Ship, which was a Junior Library Guild Selection and received four starred reviews; and Dangerously Ever After. She is also an award-winning journalist whose articles have appeared in Newsweek, Salon, The New York Times Magazine, and Mother Jones. She lives in California.

A School Library Journal Best Book of 2017!
A Washington Post Best Book of 2017!
One of The New York City Public Library Notable 50 Best Books for Teens!
The California Book Awards Young Adult Winner!
An ILA Notable Book for a Global Society!
Oklahoma Sequoyah Book Award Winner!
Maryland Association of School Librarians YA Nominee!
The Florida Teens Read Hope Speak List Book Choice!
The Green Mountain Book Award Winner!
A 2020 Grand Canyon Nominee!
"A sensitive study of an incident wrapped up in so many modern conundrums." --The Financial Times
"The text shifts from straightforward reporting to lyrical meditations, never veering into oversentimentality or simple platitudes. Readers are bound to come away with deep empathy for both Sasha and Richard. VERDICT Slater artfully unfolds a complex and layered tale about two teens whose lives intersect with painful consequences. This work will spark discussions about identity, community, and what it means to achieve justice." --School Library Journal

"With a journalist's eye for overlooked details, Slater does a masterful job debunking the myths of the hate-crime monster and the African-American thug, probing the line between adolescent stupidity and irredeemable depravity. Few readers will traverse this exploration of gender identity, adolescent crime, and penal racism without having a few assumptions challenged. An outstanding book that links the diversity of creed and the impact of impulsive actions to themes of tolerance and forgiveness." --Kirkus starred review

"Using details gleaned from interviews, social media, surveillance video, public records, and other sources, Slater skillfully conveys the complexities of both young people's lives and the courage and compassion of their families, friends, and advocates, while exploring the challenges and moral ambiguities of the criminal justice system. This painful story illuminates, cautions, and inspires." --Publishers Weekly starred review

"It is likely that this account will spark conversations, debates, and contemplation, perhaps leading readers to define for themselves what justice means."--VOYA

"[A] multi-layered lesson on the healing power of humanity." --Shelf Awareness starred review

"...a powerful story of class and race (Sasha is white), gender and identity, justice and mercy, love and hate. Slater has crafted a compelling true-crime story with ramifications for our most vulnerable youth." --The Horn Book

"This book challenged my views and it started a conversation in my house that I thought I'd never have. We all changed, at least in my house, because of this book." --Kate Terbush, The LA Times