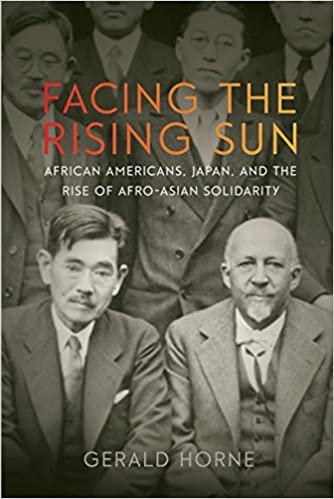 Facing the Rising Sun: African Americans, Japan, and the Rise of Afro-Asian Solidarity

In November 1942 in East St. Louis, Illinois a group of African Americans engaged in military drills were eagerly awaiting a Japanese invasion of the U.S.― an invasion that they planned to join. Since the rise of Japan as a superpower less than a century earlier, African Americans across class and ideological lines had saluted the Asian nation, not least because they thought its very existence undermined the pervasive notion of “white supremacy.” The list of supporters included Booker T. Washington, Marcus Garvey, and particularly W.E.B. Du Bois.

Facing the Rising Sun tells the story of the widespread pro-Tokyo sentiment among African Americans during World War II, arguing that the solidarity between the two groups was significantly corrosive to the U.S. war effort. Gerald Horne demonstrates that Black Nationalists of various stripes were the vanguard of this trend―including followers of Garvey and the precursor of the Nation of Islam. Indeed, many of them called themselves “Asiatic”, not African. Following World War II, Japanese-influenced “Afro-Asian” solidarity did not die, but rather foreshadowed Dr. Martin Luther King’s tie to Gandhi’s India and Black Nationalists’ post-1970s fascination with Maoist China and Ho’s Vietnam.