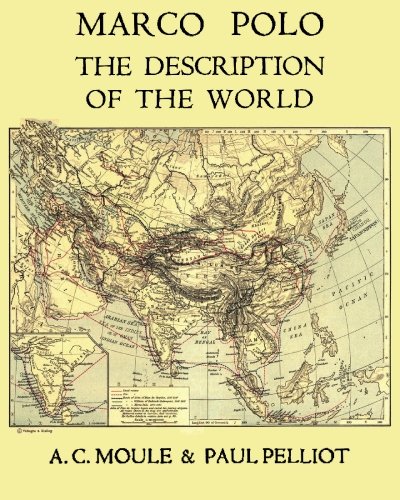 Marco Polo: The Description of the World

This is by far the most complete and most authoritative translation of the work of Marco Polo (1254-1324). It is based on a manuscript found by Sir Percival David (1892-1964) in the Catedral de Toledo in Spain where it had lain forgotten for 130 years. That manuscript was a copy written in 1795 and was in turn based on a manuscript written in about 1400. The manuscript in Cathedral de Toledo is in Latin. Arthur Christopher Moule (1873-1957) painstakingly transcribed it into type written text. He was so careful to be faithful to the original that he even transcribed meaningless punctuation marks. The Latin text was published as Volume 2 in 1935, even though it was published first. Volume One followed three years later and was published in 1938. A. C. Moule took 17 different versions of the Marco Polo manuscripts. He then combined them into one document by putting into italics those words that are not found in the other versions. Then, on the outside margins and sometimes in the footnotes, he uses a code to show where and in which version the words in italics can be found. He was careful to note the differences. Every word that is different from the words of Ramusio or Yule is put in italics. In addition, there is a chart showing where the page numbers to this work are different from the page numbers of the other translations. Thus, a reader looking at a page of this book can quickly find the equivalent page in the Yule work.