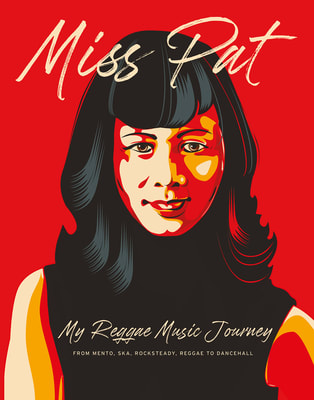 VP Records co-founder, and one of the reigning matriarchs of Reggae music, Patricia "Miss Pat" Chin, continues to lead the largest independent label and distributor of Caribbean music. Her energetic and engaging autobiography covers her family history, her relationship with her late husband Vincent Chin - and to Jamaica overall - her arrival in New York City in the late 70s, and of course her crucial role in the founding of VP Records. The book is packed with fantastic archival images spanning the emergence of Jamaican music as a cultural force in the 1950s up until today, bringing Miss Pat's revelatory memoir to life. Perspectives from business people, politicians, and musicians including Chris Blackwell (founder of Island Records), Edward Seaga (Former prime minister of Jamaica), singer Marcia Griffiths, and Lee "Scratch" Perry further light up the amazing story of Miss Pat's life and experiences.

Review Quotes:
PRAISE FOR MISS PAT:
"To live such a long and successful life in the reggae business means she must have been tougher than any king of the street or bully of the boardroom... Key to the book's appeal is an excellent selection of images from a host of reggae's finest photographers to guide the sequencing of Miss Pat's remarkable story, which also ends up as a pictorial tribute to the strength and resilience of her extended family."
- The Wire magazine [April 2021 issue], Steve Barker

"When I started Island Records in Jamaica in 1959, there were no local records being produced other than Calypso, which sold to tourists, or Mento, which was Jamaican 'folk' music. I was one of the first to record Jamaican 'popular' music as was Eddie Seaga, who later became Prime Minister. I called on many shops that sold music. The best independent shops were operated by the Chinese Jamaicans... Leslie Kong, KG Records at Cross Roads, the Wong family at Wonards and Randy and Pat Chin at Randy's. The Chins built up a huge business when they moved to NYC and really became the biggest and best distributor in the U.S. of the music that was created in Jamaica."
- Chris Blackwell

"Studio 17 {the Chin's recording studio} was the main studio in the early 70s because that was one of the first independents, before even Channel One. All the producers were going there, and most of the Reggae producers have recorded there. When I did my first sessions, it was twenty dollars an hour, so I could rent the studio for three hours and pay my musicians and work on songs. Randy's was the studio at the time. A lot of hits came out of there. And Miss Pat was there every day."
- Twinkle Brothers / Norman Grant

"When I think about Miss Pat and Vincent Chin of Randy's Records, I know that Randy's was everybody's friend, Randys Records came in the business and help a lot of people who couldn't get rich anywhere, and Vincent, he was one of the best man in Jamaica; him help us all.

Before they set up the studio, they did find a likkle shop down on Parade, and then they were selling so much records. So that's where Joe Gibbs go set up after him find out that Randy's was down there and they were selling so much. Randy was the first person who was setting up something for the people to survive, so they were the best people in the record business. They were simply the best, and Miss Pat was the brain - she is the brain. The woman is the brain. Andy Randy is a man who was very friendly, but Miss Pat was behind him, the wife."
​- Lee "Scratch" Perry

Author
Patricia "Miss Pat" Chin is the dynamic force behind VP Records, the world's largest reggae music label, a person of unmatched energy and enthusiasm. She is the mother of four, grandmother of 12 and great-grandmother of three. The last few years, she's focused her passions on giving back, collaborating with illustrator, Michael Thompson, in the creation of the pop-up exhibit titled A Reggae Music Journey, on the history of reggae, in cooperation with VP Records.