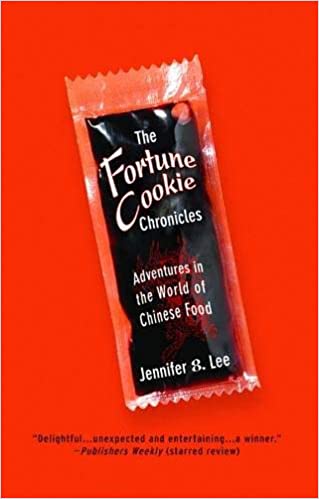 The Fortune Cookie Chronicles: Adventures in the World of Chinese Food

If you think McDonald's is the most ubiquitous restaurant experience in America, consider that there are more Chinese restaurants in America than McDonalds, Burger Kings, and Wendy's combined. Former New York Times reporter and Chinese-American (or American-born Chinese). In her search, Jennifer 8 Lee traces the history of Chinese-American experience through the lens of the food. In a compelling blend of sociology and history, Jenny Lee exposes the indentured servitude Chinese restaurants expect from illegal immigrant chefs, investigates the relationship between Jews and Chinese food, and weaves a personal narrative about her own relationship with Chinese food. The Fortune Cookie Chronicles speaks to the immigrant experience as a whole, and the way it has shaped our country.

Jennifer 8. Lee is a journalist and founder of Plympton, a literary studio. She was a metropolitan reporter at The New York Times, where she has worked for many years. She harbors a deep obsession for Chinese food, the product of which is The Fortune Cookie Chronicles (Twelve, 2008), which explores how Chinese food is all-American.At the Times, she has written about poverty, the environment, crime, politics, and technology. She has been called, by NPR, a "conceptual scoop artist." One of her better known articles is on the Man Dates, and also on the fastest growing baby name in the history of America.She was born and raised in New York City, attending Hunter College Elementary School and Hunter College High School for a total of 14 years. She majored in applied math and economics at Harvard, where she also angsted a lot about The Harvard Crimson, a fabulous start-up magazine called Diversity & Distinction, and the Asian American Association. After college, she fled to China and spent a year at Beijing University studying international relations. She has a younger sister named Frances (foreign exchange programmer) and a younger brother named Kenneth (actuary). If you string their first initials together, it spells JFK, which their parents tease is the airport they landed at when they first came to the United States. (though currently, JFK is her least favorite of the NYC airports).She has a purple stuffed hippo named Hubba Bubba who travels the world with her. She used to know how to solve a Rubiks Cube, though is a bit rusty now. And she has always harbored fantasies of being a fortune cookie message scribe. She lives in Harlem (about four blocks away from her parents). She makes great turkey fried dumplings (recipe from mom).She is a former member of the Poynter Institute National Advisory Board, a board member of the Asian American Writers Workshop, and has been featured in the Esquire Women We Love issue.