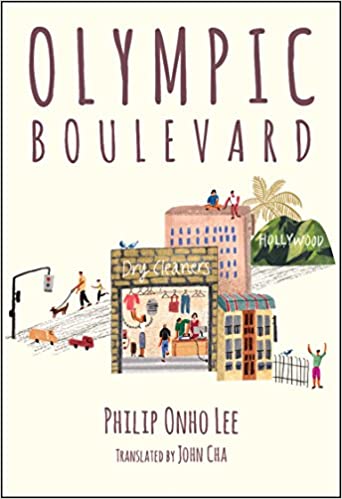 Fiction. Translated from the Korean by John Cha. Olympic Boulevard is a full–length novel by Philip Onho Lee that depicts the joys and sorrows of Korean immigrants in the United States. The story centers on a group of Koreans who emigrated in 1981 to build a new life and pursue the American Dream. Drawing on his experiences as a first–generation immigrant, Lee vividly depicts the ups and downs of Koreans' struggle to adjust to American life through lively storytelling and humor.

John Cha lives and writes in Oakland, California. He has written several volumes of biographies about Korean and American leaders and is an award-winning translator of Korean literature into English.

His book titles include Willow Tree Shade: The Susan Ahn Cuddy Story; The Do or Die Entrepreneur: A Korean American Businessman’s Journey; Exit Emperor Kim Jong-il: Notes from His Former Mentor. Currently, he is working on The Rite of Truth: telling/retelling, a book about his sister Theresa Cha.

In his own words: “Welcome to my world. I love Korean language, food, and literature. Ever since I came to America at age fifteen, I spent most of my life telling people about Korea, her pains and triumphs. At age sixty something, you’d think that you heard them all. Yet, I am constantly amazed and pleased that there are so many more stories out there waiting to be told, waiting to be heard.”

His coauthor, K.J. Sohn, is a senior fellow at Gyeonggido Development Institute. Sohn is a former newspaper reporter; and senior research fellow at National Intelligence Service of Korea.