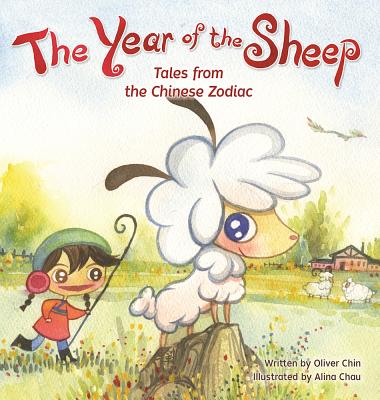 The Year of the Sheep: Tales from the Chinese Zodiac

Sydney is a bold lamb with a keen nose for adventure. Her breathtaking journey celebrates the new year. 2015 was The Year of the Sheep.

The lamb Sydney befriends the shepherd girl Zhi and other animals. But to her parents' dismay, Sydney may walk to the beat of a different drummer. However, after a storm strikes and causes a problem for everyone, can Sydney show them how valuable a sheep's qualities can be? Befriending people and the other zodiac animals, Sydney shows the best traits of people born in The Year of the Sheep, Illustrating expressive characters and vibrant action, artist Alina Chau creates an inviting new world for readers to explore. Tales from the Chinese Zodiac is a popular annual children's book series showcasing the twelve charming animals that embody the Chinese New Year.

Sydney's stirring travels to discover her real nature will delight children and adults alike. Kids love identifying with how each animal embarks on a unique quest to discover his or her own character: Bright and dynamic illustrations will appeal to parents, those interested in Asian culture, and, of course, animal lovers.

Teachers appreciate how Tales from the Chinese Zodiac is the only English series on each of the animals of the Chinese lunar calendar. Librarians like how it one of the longest-running children's book series featuring Asian American themes. Now readers everywhere can enjoy these entertaining and original tales. "Oliver Chin's Tales from the Chinese Zodiac delight the eyes and heart.... The Year of the Sheep is no exception, with beautiful artwork and an inspirational message."

Oliver Chin is the author of the popular annual children's book series Tales from the Chinese Zodiac. This remains the only series in English on the animals of the Lunar New Year, which is increasingly celebrated worldwide. He presents at schools, libraries, and museums nationwide and teaches artists of all ages how to create their own comic books. Alina Chau received her Master of Fine Arts in Animation from UCLA, School of Theater, Film and Television in 2001. She has helped produce animation and gaming titles Ben 10, Silent Hill, Gears of War, The Incredible Hulk, God of War, Medal of Honor, Sypro, and Star Wars: The Clone Wars. See her art at alinanimation.blogspot.com.