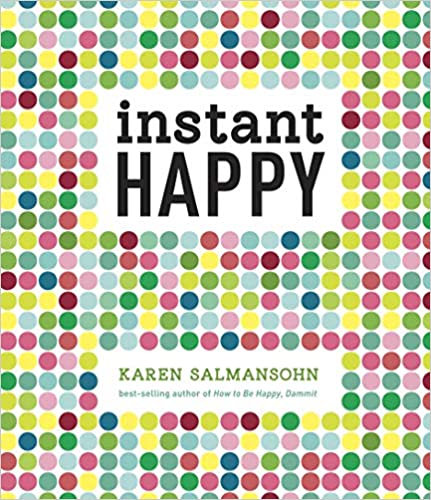 Want to be happy, dammit? If so, you gotta teach your old brain some new tricks and start thinking more optimistically! When you train your brain to think more positive thoughts, you’re more likely to form positive habits—which then leads you to more positive results. (And I’m positive about that!)

Unfortunately, it’s not always easy to think positively. Life is full of ups and downs; it ebbs and flows. And sometimes during the tough times, we find ourselves stuck in a downward “negative-thought spiral.” All too quickly we go from thinking “this one thing sucks” to “my whole DAY sucks” to “my WHOLE LIFE sucks” to “THE WORLD SUCKS” to “DISTANT GALAXIES SUCK!”

So, what’s the solution? Instant Happy, of course! This book uses a psychological tool called pattern interrupts to stop a moving train of negative thoughts in its tracks. Each page in this book offers a different pattern interrupt—or what I refer to as a “happy-thought intervention”—designed to counteract limiting beliefs and jumpstart a new pattern of positive, productive thought.

But what’s the big deal with positivity, anyway? Well, in order to answer that question, we first have to look at what’s so wrong with negative thinking.

Neuroscientists have a biological explanation for why those downward negative-thought spirals happen in the first place. MRIs have shown that every time people think angry thoughts or imagine worst-case scenarios, they send a surge of blood flowing into the brain regions associated with depression and anger—which refuels their depression and anger in a destructive feedback loop. The sadder and angrier you become, the more your body gets flooded with troublemaking “fight or flight” neurochemicals, which shut down the more evolved neocortex part of your brain. Basically, when you’re trapped in a really negative fight-or-flight thought pattern, you’re limited to using a mere 20 percent of your brain’s thinking power. This is why during tough times you might find it very difficult to interpret events correctly, communicate feelings effectively, or think with a long-term optimistic lens.