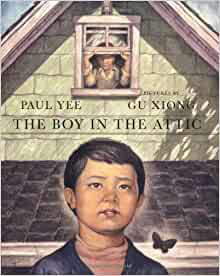 The Boy in the Attic

Seven-year-old Kai-ming Wong is wide-eyed over the big North American city where he and his parents have gone to live. It is a far cry from the hills and countryside of South China, the only home Kai-ming has ever known. The glass towers and shiny cars are as foreign to the boy as the English spoken by the children playing in the streets. So Kai-ming stays inside his house while his parents search for work.

Pretty soon, the boy realizes that he's not alone. In the attic, he discovers a ghost -- a blond-haired boy about Kai-ming's age. At first they can't understand each other's language, but a magical black butterfly from Kai-ming's homeland helps them speak. As the weeks go by, the youngsters become good friends, playing together in the attic whenever Kai-ming's parents are away. But one day, Kai-ming's family moves to a new house, and his friend, trapped forever as a ghost in the attic, cannot come. So Kai-ming gives the ghost a wonderful gift -- the magical black butterfly -- so he'll be able to speak with the next child to visit the attic.

About the author and illustrator.

Paul Yee is a 3rd generation Chinese Canadian. He grew up in Vancouver's Chinatown. He received an MA in history from University of British Columbia.

Gu Xiong is a noted fine artist from China who immigrated to Canada at the time of Tiananmen Square. He works in the Fine Arts Department at the University of British Columbia.