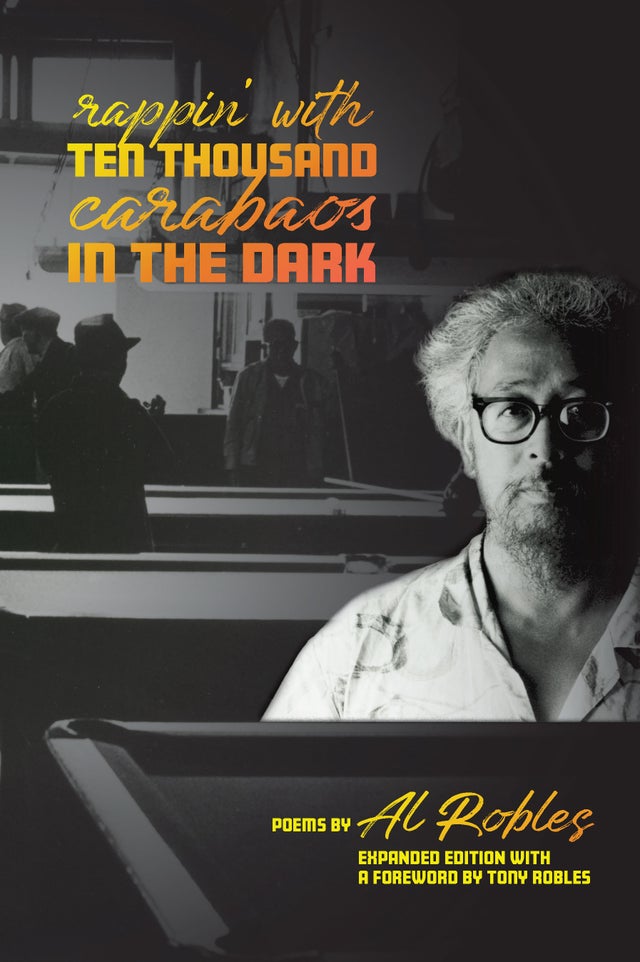 Rappin' With Ten Thousand Carabaos in the Dark (Expanded Edition)

EXPANDED EDITION WITH A FORWARD BY TONY ROBLES

AND ESSAY BY AL ROBLES

Originally published in 1996, RAPPIN' WITH TEN THOUSAND CARABAOS IN THE DARK is a collection of poetry by the late Al Robles, the quintessential Pilipino American poet, , and co-founder of the Kearny Street Workshop in San Francisco.

In this new expanded edition that also commemorates UCLA AASC's 50th anniversary, the book includes a forward by Tony Robles, as well as a classic essay by Al Robles from Amerasia Journal. Described by Ishmael Reed as "a journey into the heart of Pilipino soul," Robles's poetry reflected his power as a storyteller and his own activism. It includes glimpses into the lives of the elderly Pilipino Manongs, whose stories and lives he documented.

Excerpts:Preface to 1996 Edition by Russell Leong

One moist morning in Watsonville, California, Al Robles, Luis Syquia and I were walking alongside the strawberry fields. The air smelled of fruit waiting to be picked. After picking a few strawberries off the vine to eat, Al told us this story: "Some Pilipinos asked me what part of the Philippines I came from. And I told them Jackson and Kearny Streets. And they said, 'Where's that?' And I said, 'Close to Ifugao Mountain.' They turned away, still puzzled."

And so the mystery and history, the struggle and promise of becoming a Pilipino in America can be found in the poetry of Al Robles—oral historian, artist and community poet. Perhaps no one has listened as closely to the voices of the Pilipino American community during the last thirty years, painstakingly recording the stories of first-generation Pilipino manongs who immigrated to Hawaii and to the Western United States. In his creative work, Al has reclaimed a community history for us all—Pilipino, Chinese, Japanese, and new immigrant alike. His community, though mainly Pilipino American, is inclusive. His poetry is inhabited by farm laborers, factory workers, Zen monks, pool hustlers, cooks, children, lovers, gamblers, preachers, warriors, pimps, prostitutes, young bloods, musicians, tricksters, barbers, stray Buddhas and goddesses. To each, he has given a blue note, a lyric refrain and a promise to remember.

Table of Contents:Foreword - "Still Hanging onto the Carabao's Tail" by Tony Robles
"As a Poet" by Al Robles

IV. "Hanging on to the Carabao's Tale" by Al Robles from Amerasia Journal
Note on the Expanded Edition by Karen Umemoto