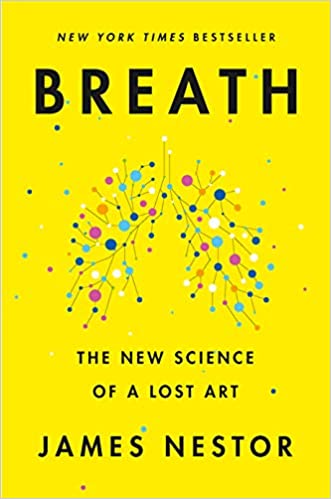 Breath: The New Science of a Lost Art

Sold out
Add to Cart
Description

No matter what you eat, how much you exercise, how skinny or young or wise you are, none of it matters if you're not breathing properly.

There is nothing more essential to our health and well-being than breathing: take air in, let it out, repeat 25,000 times a day. Yet, as a species, humans have lost the ability to breathe correctly, with grave consequences.

Journalist James Nestor travels the world to figure out what went wrong and how to fix it. The answers aren't found in pulmonology labs, as we might expect, but in the muddy digs of ancient burial sites, secret Soviet facilities, New Jersey choir schools, and the smoggy streets of São Paulo. Nestor tracks down men and women exploring the hidden science behind ancient breathing practices like Pranayama, Sudarshan Kriya, and Tummo and teams up with pulmonary tinkerers to scientifically test long-held beliefs about how we breathe.

Modern research is showing us that making even slight adjustments to the way we inhale and exhale can jump-start athletic performance; rejuvenate internal organs; halt snoring, asthma, and autoimmune disease; and even straighten scoliotic spines. None of this should be possible, and yet it is.

Drawing on thousands of years of medical texts and recent cutting-edge studies in pulmonology, psychology, biochemistry, and human physiology, Breath turns the conventional wisdom of what we thought we knew about our most basic biological function on its head. You will never breathe the same again.

James Nestor has written for Outside, Scientific American, The Atlantic, Dwell, The New York Times, and many other publications. His book Deep: Freediving, Renegade Science, and What the Ocean Tells Us about Ourselves was a finalist for the 2015 PEN/ESPN Award for Literary Sports Writing, an Amazon Best Science Book of 2014, and more. Nestor has appeared on dozens of national television shows, including ABC's Nightline and CBS's Morning News, and on NPR. He lives and breathes in San Francisco.​

Reviews​
"A transformative book that changes how you think about your body and mind." --Joshua Foer, New York Times-bestselling author of Moonwalking with Einstein: The Art and Science of Memory

"Breath is an utterly fascinating journey into the ways we are wired. No matter who you are, you'll want to read this." --Po Bronson, New York Times-bestselling author of What Should I Do with My Life? and coauthor of NutureShock

"An eye-opening, epic journey of human devolution that explains why so many of us are sick and tired. A must-read book that exposes what our health care system doesn't see." --Dr. Steven Y. Park, Albert Einstein College of Medicine, author of Sleep, Interrupted

"I don't say this often, but when I do I mean it: This book changed my life. Breath is part scientific quest, part historical insight, part Hero's Journey, full of groundbreaking ideas, and a rollicking good read. I had no idea that the simple and intuitive act of inhaling and exhaling has taken such an evolutionary hit. As a result, I figured out why I sleep so badly and why my breathing feels so often out of sync. With a few simple tweaks, I fixed my breathing and fixed myself. A transformational book!" --Caroline Paul, bestselling author of The Gutsy Girl

"If you breathe, you need this book. When we undervalue anything, including something so basic as breathing, bad things always happen--and Nestor makes it clear how awful it's gotten. But he also provides a clear airway back to better, deeper, stronger respirations." --Wallace J. Nichols, PhD, New York Times-bestselling author of Blue Mind

"Breath shows us just how extraordinary the act of breathing is and why so much depends on how we do it. An enthralling, surprising, and often funny adventure into our most overlooked and undervalued function." --Bonnie Tsui, author of Why We Swim and American Chinatown