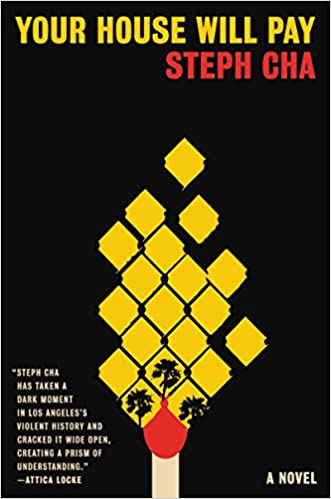 Your House Will Pay

In the wake of the police shooting of a black teenager, Los Angeles is as tense as it's been since the unrest of the early 1990s. But Grace Park and Shawn Matthews have their own problems. Grace is sheltered and largely oblivious, living in the Valley with her Korean-immigrant parents, working long hours at the family pharmacy. She's distraught that her sister hasn't spoken to their mother in two years, for reasons beyond Grace's understanding. Shawn has already had enough of politics and protest after an act of violence shattered his family years ago. He just wants to be left alone to enjoy his quiet life in Palmdale.

But when another shocking crime hits LA, both the Park and Matthews families are forced to face down their history while navigating the tumult of a city on the brink of more violence.

Steph Cha is the author of the Juniper Song crime trilogy. She's an editor and critic whose work has appeared in the Los Angeles Times, USA Today, and The Los Angeles Review of Books. A native of the San Fernando Valley, she lives in Los Angeles with her husband and two basset hounds.

“Impassioned. . . . [Cha] dives so deep into her characters because she believes that communicating their nuances across racial lines is essential. . . . A page-turner.”--USA Today

“A propulsive, well-told, and most important of all, well-researched journey of two families. . . . Cha's writing is memorable and often poetic.”--San Francisco Chronicle

“Riveting. . . . Engrossing. . . . Cha unflinchingly delves into the complex emotions that drive families, violence, and the need to survive. Your House Will Pay sets a new high for the talented Cha.”--Associated Press

“Compelling and risk-taking. . . . That Cha is drawn to contend with voices that don't strictly represent her cultural heritage, while taking head-on one of the most devastating events in Los Angeles history, is admirable as well as ambitious. Cha is a remarkably generous writer.”--Los Angeles Review of Books

“This L.A. noir mystery ties past and present together without resorting to easy answers.”--Washington Post

“ An explosive story of race, identity, and violence.”--Bustle

“[A] gripping thriller set during a racially charged moment in L.A.'s history.”--Refinery 29

“Focusing on the lives of two Los Angelenos, Cha's crime novel steps back from her usual superb P.I. books to go deeper, examining the tensions between the Korean-American and African-American communities.”--Boston Globe

"Gripping, incendiary. . . . An incisive and searing look at race relations, violence, and the intersection of disparate traumas. It's a riveting, revelatory novel--a must-read."--Nylon Magazine

"It's an extremely delicate subject matter, and Cha does a masterful job imbuing each character with nuance and care."--Buzzfeed

“[Cha] understands the messiness of justice and the complexity of human interaction. . . . One of the pleasures of the book is how deftly Cha renders so many layers of Los Angeles society. . . . All of this is related unsentimentally and is refreshingly depicted.”--Alta

"A propulsive and well-plotted novel set in Los Angeles where crime and tension are at an all-time high."--The Millions

"Steph Cha's Your House Will Pay has got it all. This suspense-filled page-turner about murder, repentance, and forgiveness draws from the fraught history of Los Angeles, where America's immigrant dream bleeds into America's racist nightmare. The novel would have been relevant thirty years ago. It will likely be relevant thirty years in the future."--Viet Thanh Nguyen, winner of the Pulitzer Prize

"Steph Cha has taken a dark moment in Los Angeles's violent history and cracked it wide open, creating a prism of understanding. . . . A touching portrait of two families bound together by a split-second decision that tore a hole through an entire city."--Attica Locke, Edgar-Award winning author of Bluebird, Bluebird

"A marvel. Cha finds new angles on a city that has been the focus of myriad stories and films. Unique and totally gripping." --Michael Connelly

"A haunting portrait of two lives, and a city, in turmoil, Your House Will Pay is both a crackling page-turner and a deeply felt work of eloquence and devastating insight. Riveting--Steph Cha firmly establishes herself as one of crime fiction's most exciting voices."--Elizabeth Little, author of Dear Daughter

"A gripping and deftly plotted story of two families, and two communities, set in the aftermath of a police shooting in Los Angeles. Steph Cha's Your House Will Pay is a sensitive portrait of racial tension, buried memory, and the difficulty of reconciliation."--Laila Lalami, author of The Other Americans

"Steph Cha's Your House Will Pay is extraordinary, a deeply-felt and sharply-observed exploration of the ties the bind, and divide, family, community, and nation. It's moving, compelling, surprising, funny, explosive, and deeply human--an unforgettable novel."--Lou Berney, author of November Road

"A propulsive, lacerating novel about two families caught in the turmoil of a city and nation in crisis. Fearless, insightful, and alight with a brutal compassion, Your House Will Pay is a devastating exploration of grief, shame, and deeply buried truths."--Catherine Chung, author of The Tenth Muse

"Steph Cha fearlessly explores the duality of LA's promise and betrayal, its vision of new beginnings and the brutal divisions that cut between race and class. Cha takes her place as one of the city's most eloquent storytellers in this soul-searching illumination."--Walter Mosley, Edgar-winning author of Down the River Unto the Sea

“A mastery of form, Cha absolutely nails it. . . . It is absolutely brilliant and it keeps the pages turning.”--Today Show