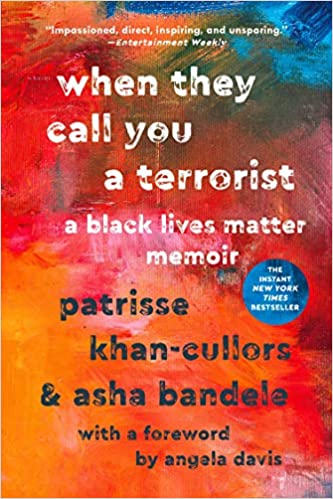 When They Call You a Terrorist: A Black Lives Matter Memoir

A poetic and powerful memoir about what it means to be a Black woman in America--and the co-founding of a movement that demands justice for all in the land of the free.Raised by a single mother in an impoverished neighborhood in Los Angeles, Patrisse Khan-Cullors experienced firsthand the prejudice and persecution Black Americans endure at the hands of law enforcement. For Patrisse, the most vulnerable people in the country are Black people. Deliberately and ruthlessly targeted by a criminal justice system serving a white privilege agenda, Black people are subjected to unjustifiable racial profiling and police brutality. In 2013, when Trayvon Martin's killer went free, Patrisse's outrage led her to co-found Black Lives Matter with Alicia Garza and Opal Tometi.Condemned as terrorists and as a threat to America, these loving women founded a hashtag that birthed the movement to demand accountability from the authorities who continually turn a blind eye to the injustices inflicted upon people of Black and Brown skin.Championing human rights in the face of violent racism, Patrisse is a survivor. She transformed her personal pain into political power, giving voice to a people suffering inequality and a movement fueled by her strength and love to tell the country--and the world--that Black Lives Matter.When They Call You a Terrorist is Patrisse Khan-Cullors and asha bandele's reflection on humanity. It is an empowering account of survival, strength and resilience and a call to action to change the culture that declares innocent Black life expendable.

patrisse khan-cullors is an artist, organizer, and freedom fighter from Los Angeles, CA. Cofounder of the Black Lives Matter Global Network and Founder of the Los Angeles-based grassroots organization Dignity and Power Now, she is also a performance artist, Fulbright scholar, popular public speaker, and a Sydney Peace Prize recipient. For 20 years, Patrisse has been on the frontlines of criminal justice reform and is currently leading Reform L.A. Jails, a ballot initiative that will be voted on in March 2020. Patrisse is currently the Faculty Director of Arizona's Prescott College new Social and Environmental Arts Practice MFA program, which she developed nesting a curriculum focused on the intersection of art, social justice and community organizing that is first of its kind in the nation.

asha bandele is the award-winning author of The Prisoner's Wife and other works. Honored for her work in journalism and activism, asha is a mother, a former senior editor at Essence and a senior director at the Drug Policy Alliance.Together, Patrisse and asha are the authors of When They Call You a Terrorist: A Black Lives Matter Memoir.