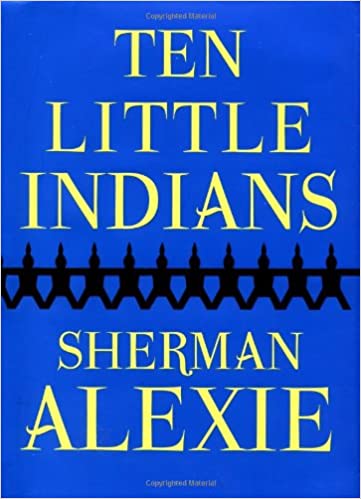 Add to Cart
Description
With Ten Little Indians Sherman Alexie offers nine new stories about Native Americans who, like all Americans, find themselves at personal and cultural crossroads, faced with heart-rending, tragic, sometimes wondrous moments of being that test their loyalties, their capacities, and their notions of who they are and who they love.

About the Author
Sherman Alexie is the author of, most recently, Blasphemy, stories, from Grove Press, and Face, poetry, from Hanging Loose Press. He is the winner of the 2010 PEN/Faulkner Award, the 2007 National Book Award for Young People’s Literature, the 2001 PEN/Malamud Award for Excellence in the Short Story, and a Special Citation for the 1994 PEN/Hemingway Award for Best First Fiction. Smoke Signals, the film he wrote and coproduced, won both the Audience Award and the Filmmakers Trophy at the 1998 Sundance Film Festival. Alexie lives with his family in Seattle.

Reviews
From Publishers WeeklyFluent, exuberant and supremely confident, this outstanding collection shows Alexie (The Toughest Indian in the World, etc.) at the height of his powers. Humor plays a leading role in the volume's nine stories, but it's love, both romantic and familial, that is the lens through which Alexie examines his compelling characters. His range stretches from the strange to the poignantly antic. In "Can I Get a Witness" an Indian woman is caught inside a restaurant when a suicide bomber blows himself up; in "Do Not Go Gentle" a father buys a vibrator dubbed "Chocolate Thunder" and uses it as a spiritual talisman to successfully bring his seriously injured baby out of a coma. In one of the book's finest stories, "The Search Engine," Corliss Joseph, an intrepid 19-year-old Spokane Indian college student, finds an obscure 1973 volume of Indian poetry and tracks down the author, an aging forklift operator with painful memories of his foray into the literary world. Basketball looms large in a number of these stories, from the thoughtful "Lawyer's League" to the superb final entry, "What Ever Happened to Frank Snake Church?" Loose, jaunty and salted with long, hilarious, inspired riffs-"What kind of life had she created for herself? She was a laboratory mouse lost in the capitalistic maze. She was an underpaid cow paying one-tenth mortgage on a three-bedroom, two-bath abattoir"-these are still cohesive, powerful narratives, expanding on Alexie's continuing theme of what it means to be an Indian culturally, politically and personally. This is a slam dunk collection sure to score with readers everywhere.
Copyright 2003 Reed Business Information, Inc.