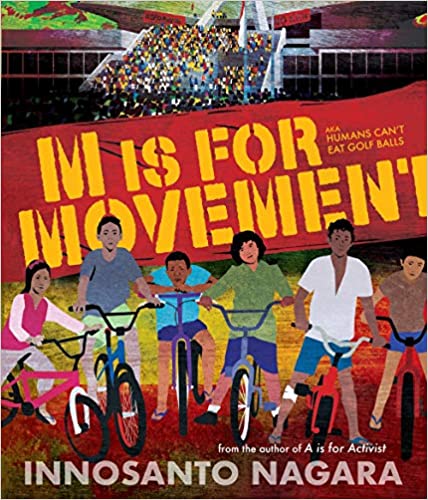 M Is for Movement

Inno's first book, A is for Activist, started a movement in social justice book publishing for children. After it came Counting on Community, then My Night in the Planetarium and The Wedding Portrait. M is for Movement is the fifth title written and illustrated by Innosanto Nagara.

"Here is the story of a child born at the dawn of a social movement. At first the protests were in small villages and at universities. But then they spread. People drew sustenance from other social movements in other countries. And then the unthinkable happened. The protagonist in this fictionalized children's memoir is a witness and a participant, fearful sometimes, brave sometimes too, and when things change, this child who is now an adult is as surprised as anyone"

Children's book author and illustrator Innosanto Nagara's books encourage children to grow up with confidence in themselves, and to be proactive citizens who are passionate about causes from environmental issues to LGBTQ rights and civil rights. Born and raised in Indonesia, Inno moved to the US in 1988. After studying zoology and philosophy at UC Davis, Inno moved to the San Francisco Bay Area, working as a graphic designer for a range of social change organizations before founding the Design Action Collective, a worker-owned cooperative design studio. Inno lives in Oakland in a cohousing community with nine adults and eight kids.