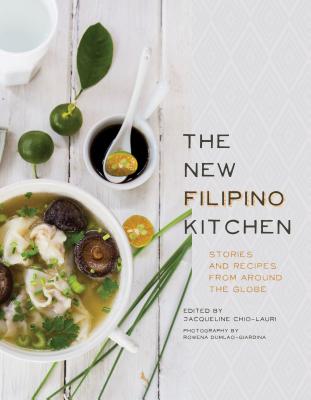 The New Filipino Kitchen : Stories and Recipes from Around the Globe

You may not realize that Filipino Americans are the second-largest Asian American group living in the United States, especially when you compare the number of, say, Japanese, Thai, and Korean restaurants to Filipino ones. There's a lot of speculation about why Filipino food hasn't taken off the way other Asian cuisines have, but one thing's for sure: there's something for everyone here.

Lauded as the next big thing by the likes of Anthony Bourdain and Jonathan Gold, Filipino food can be somewhat difficult to define, as it melds indigenous dishes with myriad foreign influences from Chinese and Spanish to South East Asian and even American. And as Filipinos have left their archipelago and set down roots all over the world, it has proven to be a highly adaptable cuisine, lending itself to different diets, preferences, and ingredients.

The New Filipino Kitchen collects 30 recipes and stories from expat Filipinos, all of whom have taken their favorite dishes with them, preserving their food memories and, if necessary, tweaking their recipes to work in a new environment or, in the case of some chefs, a more modern context. With contributions from the White House executive chef Cristeta Comerford, Bocuse d'Or Norway winner Christian André Pettersen, 2015 MasterChef New Zealand runner-up Leo Fernandez, five-time Palanca Award winner and poet Francis Macansantos, and the "Food Buddha" Rodelio Aglibot, this is a multifaceted, nuanced introduction to the world of Filipino food and food culture.

About the Author:
Jacqueline Chio-Lauri has more than eight years' experience in the food industry opening and managing restaurants at deluxe hotels, such as Shangri-La and Sheraton. While working in Dubai, she was one of the five young women professionals featured in Emirates Woman magazine's special report "Why the Future Is Female."

Her writing has appeared in anthologies and compilations such as Chicken Soup for the Soul: Find Your Inner Strength and Tales of Our Lives: Fork in the Road. Her website, My Food Beginnings, was created to fire up an appetite for Filipino food worldwide. The New Filipino Kitchen, her first book, won the Sunshot Prose 2017 Finalist Prize before it was published. She currently lives in the United Kingdom, her seventh country of residence.

Praise for The New Filipino Kitchen

Named a top cookbook of 2018 by the San Francisco Chronicle and Epicurious.

"A useful and practical introduction and an excellent addition to any cook's bookshelf." --Library Journal

"[The contributor's] recipes, though all rooted in tradition and a shared homeland, are as varied as their stories." --Epoch Times

"The contributors to NFK provide recipes with written personal narratives that almost make mini-chapters. These are recipes with backstories, with connections across time to family lore and history. This is a lovely, informative, and delicious cookbook." --Powell's

"Contributors' entrancing essays about work, life, and love of their heritage are not to be missed . . . . A gentle, inspiring, and exciting introduction to a savory world still new to many U.S. readers." --Booklist, starred review

"Remembrances of kitchens past are paired with ideas for tomorrow's dinner in this sentimental exploration of a wildly diverse cuisine." --Publishers Weekly

"An engrossing, page-turner of a cookbook. If you can even call it a cookbook--it's more of a short story collection with delicious, addictive recipes. You can find everything that makes food so special: the connection between family and the dinner table, tradition and innovation, and preserving cultural identity in a world that's increasingly homogenized. It makes me hungry." --Brian McGinn, Emmy-nominated director and executive producer, Chef's Table

"A wonderful multilayered answer to the question 'What is Filipino food?' and an invitation to everyone to get cooking." --Naomi Duguid, author of James Beard Award-winning Taste of Persia

"Brilliant! Chio-Lauri has captured the diversity of the country and cuisine in an elegant, visually beautiful, yet relaxed style." --Chris Dwyer, food and luxury travel writer for CNN, BBC, and other global media

"Beautifully written for anyone who loves a good tale and good food." --Dianne Jacob, author of Will Write for Food

"You don't have to be Filipino to appreciate what these writers discover about their native cuisine and, in turn, themselves." --Janet Rausa Fuller, two-time James Beard Journalism Award finalist

"This must-have cookbook combines reminiscences and recipes that open new ways of preparing foods." --Matilda Butler, editor of Memories Sweet and Savory and the award-winning Seasons of Our Lives

"A moving and mouthwatering tribute to one of today's most popular cuisines." --Alexis Williams Carr, editor and publisher, New Millennium Writings

"While food fills the stomach, it's the stories that nourish the soul. This book is spot-on." --Claude Tayag, food writer, chef, and host of Chasing Flavors

"An amazing anthology of dishes that will suit any occasion and certainly have your guests cheering." --Cathal Armstrong, award-winning chef, restaurateur, and author of My Irish Table