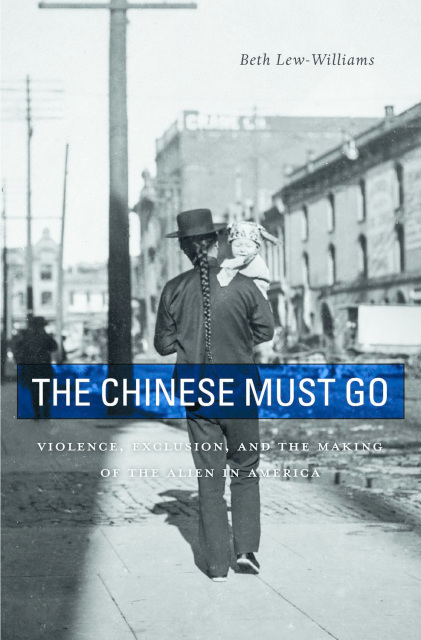 The Chinese Must Go: Violence, Exclusion, and the Making of the Alien in America

Add to Cart
Description
In 1885, following the massacre of Chinese miners in Wyoming Territory, communities throughout California and the Pacific Northwest harassed, assaulted, and expelled thousands of Chinese immigrants. The Chinese Must Go shows how American immigration policies incited this violence, and how this gave rise to the concept of the "alien" in America.
Our story begins in the 1850s, before federal border control established strict divisions between citizens and aliens--and long before Congress passed the Chinese Restriction Act, the nation's first attempt to bar immigration based on race and class. When this unprecedented experiment failed to slow Chinese migration, armed vigilante groups took the matter into their own hands. Fearing the spread of mob violence, policymakers redoubled their efforts to seal the borders, overhauling immigration law and transforming America's relationship with China in the process.

By tracing the idea of the alien back to this violent era, Lew-Williams offers a troubling new origin story of today's racialized border.​In 1882, the United States launched an unprecedented experiment in federal border control--which promptly failed. The Chinese Must Go examines this formative moment when America's lackluster attempt to bar Chinese workers provoked a wave of anti-Chinese violence across the U.S. West.

In 1885 and 1886, white vigilantes in over 150 communities used intimidation, harassment, bombs, arson, assault, and murder to drive out their Chinese neighbors. This little-known outbreak of racial violence had profound consequences. Displacing tens of thousands of Chinese immigrants, the expulsions reshaped America's racial geography. In response, the federal government not only overhauled U.S. immigration law, but also transformed its diplomatic relations with China. The Chinese Must Go recasts the history of Chinese exclusion and its importance for modern America.

Author
Beth Lew-Williams is a historian of race and migration in the United States. She is Associate Professor of History at Princeton University. The Chinese Must Go won five book awards, including the Ray Allen Billington Prize and the Ellis W. Hawley Prize from the Organization of American Historians and the Caroline Bancroft History Prize.

Review Quotes:
In her skillful retelling of the history of white workers' violence against Chinese immigrants and the formulation of laws to first restrict, and then exclude, Chinese laborers from the United States in the mid-late 19th century, Beth Lew-Williams weaves a story of racial discrimination and nativism that continues to resonate today.--Andrea Worden "South China Morning Post" (8/20/2018 12:00:00 AM)

With scrupulous research and conceptual boldness, Lew-Williams applies the nuances of a 'scalar' lens to contrast anti-Chinese campaigns at local, regional, and national levels, producing a social history that significantly remakes the well-established chronology of Chinese exclusion by highlighting the role of anti-Chinese violence and vigilantism in advancing immigration controls on the Chinese from goals of restriction to exclusion.--Madeline Y. Hsu, author of Asian American History: A Very Short Introduction

The Chinese Must Go presents a powerful argument about racial violence that could not be more timely. It shows why nineteenth-century pogroms against the Chinese in the American West resonate today. White nationalists targeted Chinese immigrants as threats to their homes and jobs and blamed the American government for failing to seal the borders.--Richard White, author of The Republic for Which It Stands: The United States during Reconstruction and the Gilded Age, 1865-1896

Moving seamlessly from the local to the international, The Chinese Must Go offers a riveting, beautifully written new account of Chinese exclusion, one that foregrounds Chinese voices and experiences. A timely and important contribution to our understanding of immigration and the border.--Karl Jacoby, Columbia University

An original and compelling analysis of Chinese exclusion in the second half of the nineteenth century, analyzing how the outbreak of anti-Chinese violence in 1885 was both caused by and helped shape American immigration policies.--Ray Allen Billington Prize Jury

Simultaneously a beautifully paced, moving read--a powerful and deeply humane account of the emergence of the racialized border, the consequences of which have echoed down to the present.--Ellis W. Hawley Prize Jury

"A powerful argument about racial violence that could not be more timely...White nationalists targeted Chinese immigrants as threats to their homes and jobs and blamed the American government for failing to seal the borders." --Richard White, author of The Republic for Which It Stands
"A riveting, beautifully written account...that foregrounds Chinese voices and experiences. A timely and important contribution to our understanding of immigration and the border." --Karl Jacoby, author of Shadows at Dawn

"Lew-Williams particularly excels at invoking the psychological effects of the law on Chinese people living in the United States." -- Slate​