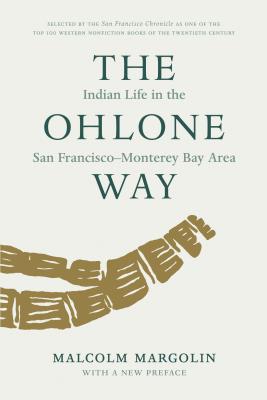 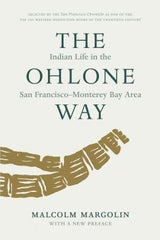 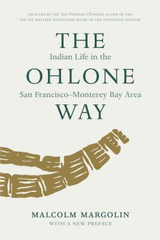 Two hundred years ago, herds of elk and antelope dotted the hills of the San Francisco-Monterey Bay area. Grizzly bears lumbered down to the creeks to fish for silver salmon and steelhead trout. From vast marshlands geese, ducks, and other birds rose in thick clouds "with a sound like that of a hurricane." This land of "inexpressible fertility," as one early explorer described it, supported one of the densest Indian populations in all of North America.

One of the most ground-breaking and highly-acclaimed titles that Heyday has published, The Ohlone Way describes the culture of the Indian people who inhabited Bay Area prior to the arrival of Europeans. Recently included in the San Francisco Chronicle's Top 100 Western Non-Fiction list, The Ohlone Way has been described by critic Pat Holt as a "mini-classic."

Sold out
Add to Cart
Author: Malcolm Margolin (Author), Michael Harney (Illustrator)
Publisher: Heyday; Second edition
Publish Date: August 1, 1978
Pages: 182
Format: Paperback
Condition: New
ISBN: 9780930588014
---
About the Author
Malcolm Margolin is the publisher emeritus of Heyday, an independent nonprofit publisher and unique cultural institution, which he founded in 1974. Margolin is author of several books, including The Ohlone Way: Indian Life in the San Francisco-Monterey Bay Area, named by the San Francisco Chronicle as one of the hundred most important books of the twentieth century by a western writer. He has received dozens of prestigious awards among which are the Chairman's Commendation from the National Endowment for the Humanities, the Fred Cody Award Lifetime Achievement from the San Francisco Bay Area Book Reviewers Association, the Helen Crocker Russell Award for Community Leadership from the San Francisco Foundation, the Carey McWilliams Award for Lifetime Achievement from the California Studies Association, an Oscar Lewis Award for Western History from the Book Club of California, a Hubert Bancroft Award from Friends of the Bancroft Library, a Cultural Freedom Award from the Lannan Foundation, and a Distinguished Service Award from the Society of Professional Journalists. He helped found the Bay Nature Institute and the Alliance for California Traditional Artists.

Reviews
"Margolin has written thoroughly and sensitively of the Pre-Mission Indians in a North American land of plenty. Excellent, well-written."
"A remarkable insight into the lives of the Ohlone Indians."
​''One of three books that brought me the most joy over the past year.''-- Alice Walker