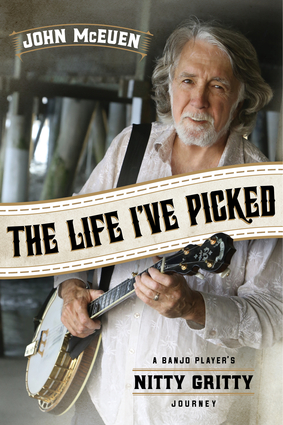 A behind-the-scenes glimpse of the life of an enduring legend and his influence on American music
Add to Cart
John McEuen is one of the founding members of the Nitty Gritty Dirt Band, NGDB. Now 50-years strong, the band is best known for its evergreen bestselling album Will the Circle Be Unbroken and for its gorgeous version of the song "Mr. Bojangles." McEuen is one of the seminal figures who conceived and originated the fusion of folk, rock and country, a unique sound still hugely popular today. In addition to performing on tour with the Nitty Gritty Dirt Band and on dozens of bestselling NGDB albums (many of which went platinum and gold), McEuen also has a successful solo performing and recording career. And as a music producer, he won the Grammy Award in 2010 for producing The Crow, a music album by Steve Martin, John's lifelong friend. McEuen writes candidly and movingly about the ups and downs in his life. Among the highs was NGDB's tour of  the Soviet Union in 1977; they were the first American group to perform there. Among the downs was the breakup of his family in the 1980s. McEuen is a born storyteller, and his tales of working with everyone from Linda Ronstadt to Willie Nelson to Johnny Cash to the Allman Brothers to Bob Dylan to Dolly Parton to, of course, Steve Martin will thrill every fan of folk, rock, and country music alike.

"Beautifully written, John's book is an intimate and revealing memoir of a long and diverse music career and the ups and downs of life on the road. We've each had a complicated and thrilling journey since our high school friendship sent us off into the world." —Steve Martin, banjo picker, actor, and writer

"John's terrific, funny, moving book makes you feel like you are right there with him on some of the most famous stages in the world, in the top recording studios, and on the never-ending road. It makes you feel that an amazing successful career in music and show business is totally within reach—as long as you can play the banjo, mandolin, fiddle, dobro, and guitar brilliantly." —David Mirkin, producer, The Simpsons

A cofounder of the Nitty Gritty Dirt Band, John McEuen has made over forty albums, hosts his Sirius/XM Satellite show called Acoustic Traveller, and is CEO of SyndicatedNews.Net.

Excerpt from the Book
​
​Unlike laidback L.A., Manhattan inspires you to do things—work, study, and learn, get out there and make it happen, mingle with the entire pastiche of the world’s people. Everybody’s busy! I had loved it since our 1967 Bitter End debut, when I turned the rental car right on a red light (almost a death penalty in NYC) and chipped a cab’s taillight. The cabbie jumped out and started yelling. “Hey, hippie! You blind? Can’t see the big yellow car? What am I gonna tell my dispatcher?
What’re we gonna do about this?”
“What about twenty bucks?” I offered.
“Fine!” The cabbie snatched the twenty out of my hand and was gone before I got back in the car. From that moment, I knew I would love it there.
It’s hard to stay depressed in the Apple. I could pick up my mood just by walking the streets. The years on York and 88th were great in many ways, although I was further away from the rest of my family than ever before. That made it difficult emotionally, but made it extra exciting when anyone visited. Marilyn always made it great when they came to see us.
I knew some things could happen in my life and career just by being conveniently based in The City. Right off, I got a call to sing and play with fifty goats, a cow, and twenty kids for a Sesame Street music video of “Oh, Susanna!” The shoot, on a Long Island farm, was incredibly cool. It was my first video where I had to lip-synch the singing, which was exciting. We recorded the song at about eight in the morning, shot that afternoon, and we were done! Next.
Soon after, I guested on All Night with Joey Reynolds, his famous late-night talk show on WOR-FM. That led to about twenty more times over the ensuing five years, bringing along Matt Cartsonis, David Amram, Martha Redbone, and Jon Mark Fletcher—all great musicians with whom I’ve worked regularly in the new century—and whomever else I could entice to go to lower Manhattan after midnight. I was exploring new music and people for hopeful use in the near future. It was like rehearsing on the radio. During one show I even interviewed the great Les Paul, who was a pioneer both musically and technologically. Immortalized by Gibson’s iconic Les Paul guitar, I asked which invention was his favorite. He said, “They’re like children. I love them all!” I had seen him play and shook his hand at the famed Iridium on Broadway two years earlier, when he was only ninety-two.
I met and interviewed fantastic singer Lou Christie one night, which was especially exciting since his “Lightning Strikes Again” was the first single I ever bought, at age seventeen. The multimillion record seller had three distinct sections, and he told me he did it all live in one take! No wonder I liked it. Joey often gave me a ride back uptown in his Mercedes around three in the morning, and his chats about old showbiz in the seemingly deserted city were great. That my visits and his open door invitation had nothing to do with the Dirt Band made me feel vibrant and valued. Reynolds said, “John, you’re a real radio guy. Call anytime!”