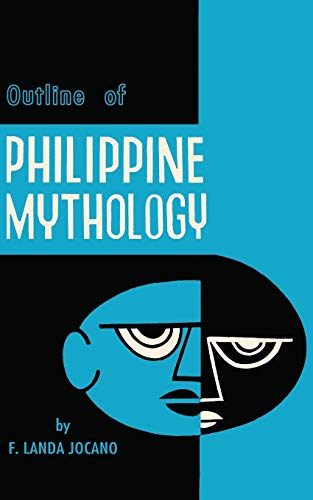 Sold out
Add to Cart
​Synopsis
This book is a collection of Philippine myths and tales of wonder grouped under a few large headings and strung together with a minimum of unobtrusive commentary by an outstanding Filipino scholar, Dr. F. Landa Jocano.
The stories are drawn both from previously published materials and from Dr. Jocano's own researches, especially in the interior fastnesses of his native Panay. While there is no attempt at comprehensiveness, one is struck by the richness and variety of these Philippine stories of gods, spirits and heroes. The variety is such as at times to induce confusion, especially where the same proper name is given to different divinities or variants of the same narrative are used.

These gleanings from the traditions of our animistic forefathers reveal some strands which they may have had in common with some of the major world religions. For example, Dr. Jocano tells us that the early Tagalogs believed in the transmigration of the soul. One would surmise a common culture trait with Indian civilization. Likewise, some details remind one of Biblical lore, such as the flood story, and the use of clay in the making of man as found both in Igorot and Bagobo traditions. The Bisayan divinity Magyan and the Manobo spirit Manduyapit, both of whom ferried the souls of the dead to the afterworld, bear a strong resemblance to Charon of Greek mythology.

Some stories may suggest conditions prevailing at the time. For example, there is an extremely interesting reference to lending money at high interest in the Sambal legend of the shark, possibly an indication that the story arose in the early phases of the introduction of money into a subsistence economy.

Clearer still are indications of the prevailing ethos among certain people. For example, the Panay epic of Hinilawod narrates the matrimonial exploits of some of its heroes. Labaw Donggon, on his way home with a new bride, hears about another beautiful woman and promptly leaves his wife with his mother and proceeds to court and win a second wife. However, his try for a third bride, a married woman, is not as successful. His brother Humadapnon wins a bride with a feat of strength and magic and then, hearing during the wedding feast about the beauty of another goddess, goes forth to woo and win her. Later, it appears that he also takes a third wife. Perhaps these stories are meant to show that in mythological times men were men, and they may also help to explain the marital behavior of their modern day descendants

Other stories lead one to question whether they antedate the coming of the Spaniards, or whether post-Magellanic traditions have been added to the pre-Hispanic accounts. For example, the Bisayan story of Hari-sa-bukid refers to the planting of tobacco on the slopes of Mt. Kanlaon. Since tobacco is an American plant and was unknown in this country before the coming of western explorers, one wonders what part of the story is pre-Hispanic, if any. Likewise, the Ilocano legend of "Lam-ang", while apparently pre-Hispanic in its framework, makes reference to various introduced features such as tobacco, Christian names like Juan, Marcos, Pasyo and Ines, and a church wedding with a nuptial mass followed by feasting where the Fandango is danced.

Some of these tales have been analyzed by scholars, both Filipinos and foreigners. Others remain to be collected and collated, as Dr. Jocano's own work demonstrates. Some day it is hoped that we can have an encyclopedic work on Philippine mythology, similar to those available for Greek, Roman, Germanic and Scandinavian folklore. In the meantime, this book may serve as an introduction for laymen to this highly interesting phase of our people's culture.