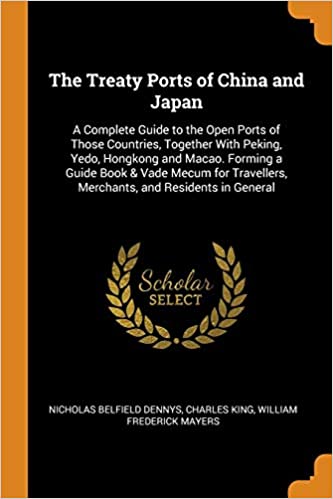 The Treaty Ports of China and Japan: A Complete Guide to the Open Ports of Those Countries, Together with Peking, Yedo, Hongkong and Macao. Forming a Guide Book & Vade Mecum for Travellers, Merchants, and Residents in General

As trade between the East and the West grew in the mid-nineteenth century, increasing numbers of Westerners travelled to China and Japan, and in 1867 this guide to the key port cities such as Hong Kong and Nagasaki was published in both Hong Kong and London. Its editor, Nicholas Belfield Dennys (?1813–99) claimed it was the first such comprehensive handbook printed for public distribution. Intended for visitors and new residents, the guide was originally typeset in China, allowing place names and other words to be printed in Chinese characters. The specially commissioned maps were also engraved in China. The book includes physical descriptions and brief histories of over twenty cities, details of schools and libraries, population statistics and much practical information, as well as a list of other publications on China and Japan. It is a valuable historical source on East Asia during a period of rapid change