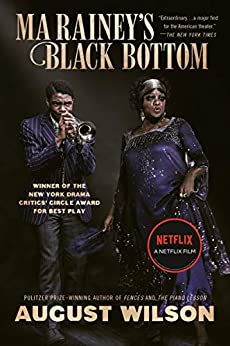 From the Pulitzer Prize-winning author of Fences and The Piano Lesson comes the extraordinary Ma Rainey's Black Bottom--winner of the New York Drama Critics’ Circle Award for Best Play.

The time is 1927. The place is a run-down recording studio in Chicago. Ma Rainey, the legendary blues singer, is due to arrive with her entourage to cut new sides of old favorites. Waiting for her are her Black musician sidemen, the white owner of the record company, and her white manager. What goes down in the session to come is more than music. It is a riveting portrayal of black rage, of racism, of the self-hate that racism breeds, and of racial exploitation.

August Wilson (1945–2005) authored Gem of the Ocean, Joe Turner’s Come and Gone, Ma Rainey’s Black Bottom, The Piano Lesson, Seven Guitars, Fences, Two Trains Running, Jitney, King Hedley II and Radio Golf. These works explore the heritage and experience of African Americans, decade by decade, over the course of the twentieth century. Mr. Wilson’s plays have been produced at regional theaters across the country, on Broadway and throughout the world. In 2003, Mr. Wilson made his professional stage debut in his one-man show How I Learned What I Learned.

Mr. Wilson received many fellowships and awards, including Rockefeller and Guggenheim fellowships in playwriting, the Whiting Writers Award and the 2003 Heinz Award. He was awarded a 1999 National Humanities Medal by the President of the United States, and received numerous honorary degrees from colleges and universities, as well as the only high school diploma ever issued by the Carnegie Library of Pittsburgh.

Mr. Wilson was born and raised in the Hill District of Pittsburgh, and lived in Seattle at the time of his death. He is survived by two daughters, Sakina Ansari and Azula Carmen Wilson, and his wife, costume designer Constanza Romero.