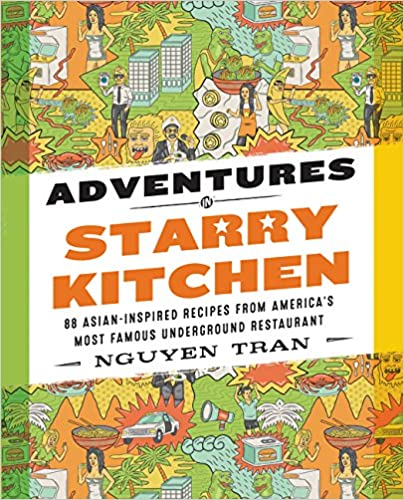 In 2008, as the American economy cratered, newly unemployed Nguyen Tran and his newly unemployed wife-to-be, Thi, opened an off-the-grid eatery in their small Los Angeles studio apartment. Word of their fabulous food quickly spread, turning their culinary "speakeasy," Starry Kitchen, into an underground sensation—and the #1 Asian fusion restaurant in L.A. on Yelp.

Threatened by the city’s health inspector, Nguyen and Thi transformed Starry Kitchen into an acclaimed and wildly popular pop-up restaurant in a downtown sushi joint. But their success was only beginning. As their clientele exploded, thanks to raves in the Los Angeles Times, Nguyen and Thi moved to a bigger space of their own in Chinatown, where they helped make the neighborhood the epicenter of L.A.’s burgeoning food scene.

Whether you’re cooking for two, four, or sixty, Adventures in Starry Kitchen demonstrates you don’t have to be a desperately hip (or even trained) chef to master sensational modern food that will amaze and delight.