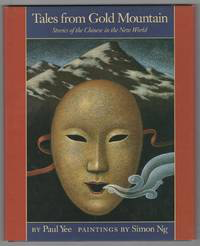 Eight original stories give readers a sense of the hardships faced by the first Chinese-Americans. In "Spirits of the Railway," a young man appeases the ghosts of dead railroad workers who were never properly buried. In "Forbidden Fruit," a father's prejudice keeps his daughter from marrying her beloved. Dramatic illustrations accompany the stories. "The brief, pithy tales strikingly reflect traditional Chinese beliefs and customs in New World circumstances.

Suitable for junior high students. This book is an excellent companion for American History Teachers, in that it gives a more authentic cultural view of the Chinese immigration to the U.S.

Paul Yee is a 3rd generation Chinese Canadian. He grew up in Vancouver's Chinatown. He received an MA in history from University of British Columbia.

Simon Ng was born in Brunei and immigrated to Canada in 1971. He is the winner of several design and illustration awards, including Gold and Silver National Magazine Awards.