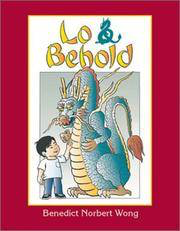 Seven-year-old Chinese American Lo Long would rather eat hamburgers than Twice Cooked Pork and he'd rather watch TV than practice his calligraphy. In short, his cultural roots are a thorn in his side. One day, however, he receives a mysterious package from Yeye, his grandfather in China and it's a doozy. It's an ancient dragon named Behold that has been looking after the Long family for 3,000 years, here to teach Lo a thing or two about his heritage. Behold subjects Lo to a blind test (hamburgers vs. Shizitou, pork meat cake) in which the boy sniffs the air and chooses the Chinese dish. ("Could it be that you actually like Chinese food?") Lo gets excited when Behold tells him that the word dragon, in Chinese calligraphy, almost looks like a dragon flying up to heaven. ("Could it be you actually like Chinese lessons?") Finally, Behold teaches Lo how to greet someone and bow in old China, and Lo says he can't wait to show Yeye. ("Could it be you actually like Chinese customs?") And it seems it could be. In Chinese school, Lo, much to the shock of his entire class, volunteers for the upcoming performance where he will have to wear traditional clothes and recite in Chinese. Yeye comes all the way back from China to see this! The colorful, cartoonish, brush-and-ink illustrations of Lo and his new friend Behold enliven this warmly told story about a boy who gets a helping "claw" in his journey to self-discovery. (Ages 4 to 8)