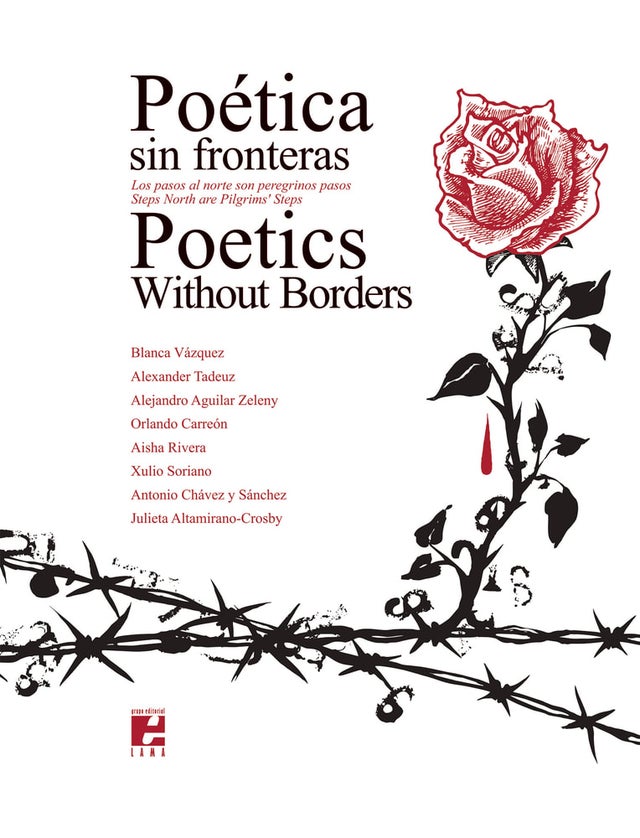 Eight poets--Blanca Vázquez (MX), Alexander Tadeuz (MX), Alejandro Aguilar Zeleny (MX), Orlando Carreón (USA), Aisha Rivera (USA), Xulio Soriano (USA), Antonio Sánchez (USA), and Julieta Altamirano Crosby (MX/USA)--united by the very thing that separates them: the border, in this case the border between Mexico and the United States, a line drawn arbitrarily through a geography that knows only the natural boundaries of rivers and mountains. It is both a separation and a site of encounter, a kind of hinge between two nations, two cultures, two languages. At the same time we can understand the border as a territory that extends both north and south, where both peoples, both languages and both cultures coexist, mutually influencing one another.

Talk of walls and borders is especially relevant today, given the rhetoric coming out of the White House. Yet POETICS WITHOUT BORDERS transcends these particular circumstances to capture the tragedy of the massive displacement of populations, increasingly present from the twentieth century until today. From Spanish Republicans forced into exile at the end of the Spanish Civil War, to the millions of Europeans displaced or imprisoned and murdered in Nazi concentration camps during World War II; from sub-Saharan Africans who struggle to make their way across the treacherous Straits of Gibraltar, to the thousands of Syrian refugees fleeing violence in their homeland who risk their lives to cross the Mediterranean in overcrowded and unstable boats. And yes, the endless stream of Mexican and Central American migrants who trek hundreds of miles to the US border. This poetry is about them, but always with these other historical diasporas in mind.

Four poets from Mexico, four from the US. For some their literary language is Spanish, for others English, and yet for others Spanglish, the hybrid of linguistic codes from both languages that has emerged over several centuries in the borderland, sometimes living side by side in parallel worlds, at others intermixing. In this anthology, each poem is presented in both Spanish and English. A number of the poets, each from a different perspective, address the theme of migration, of the trip north, el paso al norte. Each attempts to capture on an individual level the movement and tragedy of hundreds of thousands of men, women and children of all ages and conditions who make the arduous trek to the border with the United States each year. These poets often cast the trip north not as a journey toward a better life, but as testimony to unfathomable loss. The three poets from Napa, California, on the other hand, have a different take. They do not address the travails of the masses struggling to reach and cross the border. Rather, in their poetry they engage with the reality of their lives as "Hispanics" or "latinos" born and raised in the United States.

These eight distinct voices, each in their own way, bring us different images of migration, diaspora and identity, yet they also have something in common. They are what Carolyn Forché calls the "poetry of witness." They stand as testimony to the human tragedy and nobility of spirit that defines the borderland.