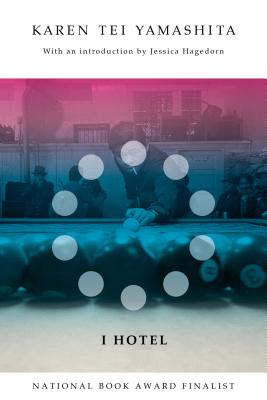 1 available
Add to Cart
Description
Dazzling and ambitious, this multivoiced fusion of prose, playwriting, graphic art, and philosophy spins an epic tale of America's struggle for civil rights as it played out in San Francisco near the end of the 1960s. As Karen Tei Yamashita's motley cast of students, laborers, artists, revolutionaries, and provocateurs make their way through the history of the day, they become caught in a riptide of politics and passion, clashing ideologies, and personal turmoil.

The tenth anniversary edition of this National Book Award finalist brings the joys and struggles of the I Hotel to a whole new generation of readers, historians, and activists.

About the Author
Karen Tei Yamashita is the author of Letters to Memory, Through the Arc of the Rain Forest, Brazil-Maru, Tropic of Orange, Circle K Cycles, National Book Award finalist I Hotel, and Anime Wong. She has been a U.S. Artists Ford Foundation Fellow and co-holder of the University of California Presidential Chair for Feminist Critical Race and Ethnic Studies. She is Professor Emeritus of Literature and Creative Writing at the University of California, Santa Cruz.

"Exuberant, irreverent, passionately researched . . . Yamashita's colossal novel of the dawn of Asian American culture is the literary equivalent of an intricate and vibrant street mural depicting a clamorous and righteous era of protest and creativity." --Booklist, starred review

"I Hotel is a brilliant, vibrantly written exploration of politics, identity, radicalism, and activism. Fusing and bending styles, Yamashita's prose sweeps the reader along with the same manifestos-at-midnight energy that drove the massive cultural changes of the '60s and '70s. Over the years since I first read it, I Hotel has grown in importance to me as a reader, as a bookseller, as a writer, and as a citizen. It is an absolute masterpiece of twenty-first century American literature." --Josh Cook

"[I Hotel is] one of my favorite books of all time." --Jeff VanderMeer

"I Hotel is an explosive site, a profound metaphor and jazzy, epic novel rolled into one. Karen Tei Yamashita chronicles the colliding arts and social movements in the Bay Area of the wayward '70s with fierce intelligence, humor, and empathy." --Jessica Hagedorn

"If you were there in 1970s San Francisco, then this book is about you. At some point in reading I Hotel, I lost all objectivity. I wept, I laughed, I read silently while moving my lips. And I read the last twelve pages again and again as if an ancestor had written them." --Shawn Wong

"A multiform swirl of a novel about a decade in the life of San Francisco's Chinatown and, by extension, the Asian experience in America. . . . With delightful plays of voice and structure, this is literary fiction at an adventurous, experimental high point." --Kirkus

"This is an ambitious epic novel. . . . Stylistically innovative, vertiginous, and sweeping, this novel achieves a miraculous blend of fact and fiction and animates an epoch when individuals tried in vain to dissolve their personalities in the rhetoric of revolutionary idealism." --2010 National Book Award Judges' Citation

"This is such a wonderful book. If you read Thomas Pynchon or you read David Foster Wallace, or any of those post-modern novels, this is the book you need to read." --MPR News

"As original as it is political, as hilarious as it is heartbreaking, I Hotel is the result of a decade of research and writing that included more than 150 personal interviews. . . . [and] will be dog-eared and underlined and assigned to college reading lists for generations. . . . In the end, the way I Hotel accounts for the Asian American movement is both sweet and sour. And for all the losses Yamashita records, there are, we know, great achievements as well. High among them is this beautiful book." --Washington Post Book World

"Brilliant. . . . [Yamashita's] ambition is achieved with efficiency, showmanship and wit. . . . A surgically deft depiction of the political entwined with the personal. . . . Yamashita's book recalls what art is for: 'To resist death and dementia . . . To kiss . . . you good-bye, leaving the indelible spit of our DNA on still moist lips. Sweet. Sour. Salty. Bitter.' In other words, I Hotel 's complex taste lingers and haunts, like something alive." --Star Tribune

"Yamashita captures the fiery righteousness--and self-righteousness--of the civil-rights movement. . . . The complexity of the era that led to the birth of Asian America. It's a glorious tone poem, a rich reminder of the multicultural, multifaceted past from which our city grows." --San Francisco Magazine

"It's a stylistically wild ride, but it's smart, funny and entrancing." --Michael Schaub, NPR

"The breadth of I Hotel 's embrace is encyclopedic and its effect is kaleidoscopic. It wants to inform and dazzle us on the confusions and conclusions on the question of culture and assimilation." --Chicago Tribune

"[Yamashita's] novel is breathtaking in its scope and its energy and innovation make it a good fit with the exciting and transformative time period that it covers. . . . I Hotel demonstrates how complicated and finally irreducible history is--the many voices and perspectives it comprises, the divergent and winding paths it takes, the way it confounds conventional narrative. Yamashita celebrates this complexity, and she's such a deft storyteller that you'll end up celebrating it with her." --Women's Review of Books

"I Hotel by Karen Tei Yamashita is the kind of book that changed the way I think about what books are capable of. It's a people's history, an activist's archive, a remembrance of time and place, and a powerful reminder that our assumptions about literature ought to be upended from time to time. It is not hyperbole to assert that I Hotel is unlike anything I have ever read. One of the most challenging and rewarding books, and an all-time favorite of mine." --Matt Keliher, Subtext Books
"I Hotel is at once heartrending and hilarious, both political and personal. And perhaps most thankfully, the writing is wicked smart without a drop of pretentiousness. Filled with pages that take big risks, I Hotel opens up new possibilities, not just for Asian American literature but also for contemporary fiction in general." --Nami Mun, Asian American Literary Awards Judges' Citation

"Huge, messy, and frantically fun, I Hotel offers a very believable panorama of life at this time. . . . The portraits of these early generation Asian Americans . . . are quite moving and conveyed without sentimentality. It's an impressive accomplishment from an author who continues to push the boundaries of innovative fiction." --Rain Taxi

"One of the the things that is so amazing about Karen Tei Yamashita's most recent novel, I Hotel, is that she not only retrieves the sad beauty of a particularly fraught period of a particularly squalid community--Asian Americans in San Francisco during the 1960s-70s--but that she does so in a way that is also exhilarating, celebratory. . . . Which is why we need novels like I Hotel to patiently help the world remember itself." --American Book Review
"I Hotel is arguably the best book published on Asian American literary history." --The International Examiner