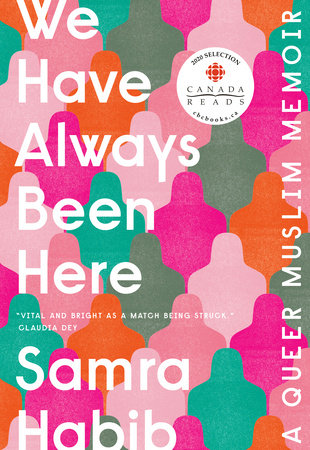 We Have Always Been Here: A Queer Muslim Memoir

"A queer Muslim searches for the language to express her truest self, making peace with her sexuality, her family, and Islam. Growing up in Pakistan, Samra Habib lacks a blueprint for the life she wants. She has a mother who gave up everything to be a pious, dutiful wife and an overprotective father who seems to conspire against a life of any adventure. Plus, she has to hide the fact that she's Ahmadi to avoid persecution from religious extremists. As the threats against her family increase, they seek refuge in Canada, where new financial and cultural obstacles await them. When Samra discovers that her mother has arranged her marriage, she must again hide a part of herself--the fun-loving, feminist teenager that has begun to bloom--until she simply can't any longer. So begins a journey of self-discovery that takes her to Tokyo, where she comes to terms with her sexuality, and to a queer-friendly mosque in Toronto, where she returns to her faith in the same neighbourhood where she attended her first drag show. Along the way, she learns that the facets of her identity aren't as incompatible as she was led to believe, and that her people had always been there--the world just wasn't ready for them yet."--