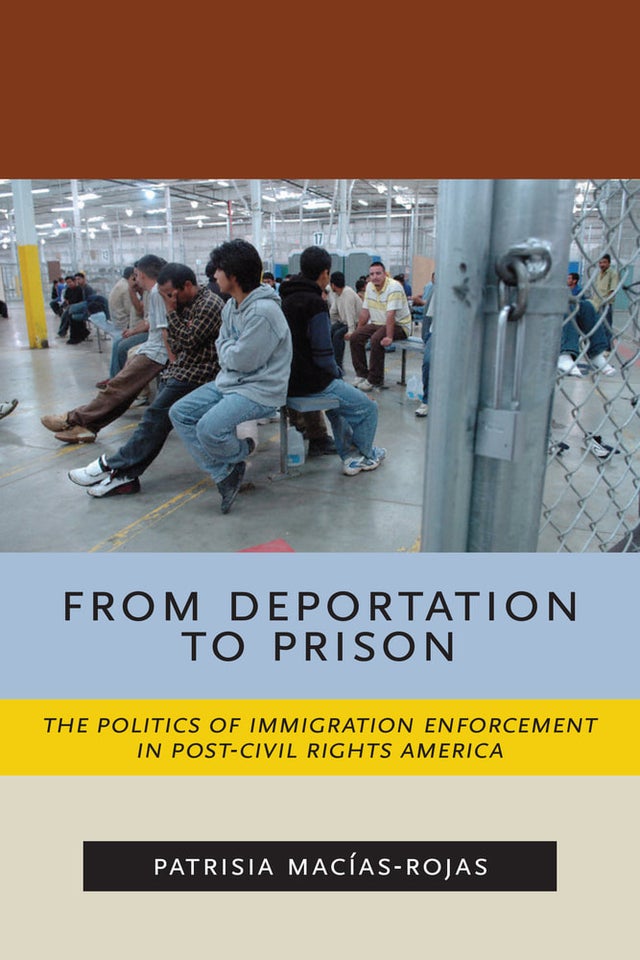 From Deportation to Prison: The Politics of Immigration Enforcement in Post-Civil Rights America

Criminal prosecutions for immigration offenses have more than doubled over the last two decades, as national debates about immigration and criminal justice reforms became headline topics. What lies behind this unprecedented increase?

From Deportation to Prison unpacks how the incarceration of over two million people in the United States gave impetus to a federal immigration initiative--The Criminal Alien Program (CAP)--designed to purge non-citizens from dangerously overcrowded jails and prisons. Drawing on over a decade of ethnographic and archival research, the findings in this book reveal how the Criminal Alien Program quietly set off a punitive turn in immigration enforcement that has fundamentally altered detention, deportation, and criminal prosecutions for immigration offenses.

Patrisia Macías-Rojas presents a "street-level" perspective on how this new regime has serious lived implications for the day-to-day actions of Border Patrol agents, local law enforcement, civil and human rights advocates, and for migrants and residents of predominantly Latina/o border communities.

Patrisia Macías-Rojas is Assistant Professor of Sociology and Latin American and Latino Studies at the University of Illinois at Chicago.

"This is an important book that scholars of both immigration and criminalization should read. The argument [namely, that the Criminal Alien Program (CAP) is responsible for a large portion of deportations] is well constructed and provocative, and Macías-Rojas breaks new empirical and theoretical ground."--International Migration Review

"The book largely brackets out activities of the powerful private prison-industrial complex, an important player in the growing criminalization of immigrants the book significantly our understanding of how and why the current immigration enforcement debacle came to be. It will be of particular interest scholars of race and immigration, inequality, and public policy."--American Journal of Sociology

"Patrisia Macias-Rojas book, From Deportation to Prison: The Politics of Immigration Enforcement in Post-Civil Rights America, provides rich insight into domestic border security in the Southern Arizona/Sonora region."--Theory in Action

"In From Deportation to Prison, Patrisia Macías-Rojas aptly situates the current deportation regime within a broader historical context by drawing on a decade of ethnographic fieldwork, hundreds of in-depth interviews in southern Arizona, and archival research in Washington, DC. Furthermore, Macías-Rojas contributes to the burgeoning deportation literature by drawing connections between the current deportation regime and mass incarceration in the United States."--Journal of American Ethnic History

"Patrisia Macias-Rojas' commanding book narrates the profound restructuring of immigration policies in the US. Using rich ethnographic data and sharp policy analyses, she shows how the merging of enforcement and deportation policies with the rigid structures of the criminal justice system result in a vicious punishment regime. The book makes a compelling case for cross-movement organizing and is essential reading for scholars, activists and policy makers."--Beth E. Richie, author of Arrested Justice

"Patrisia Macías-Rojas is a sociologist and yet her in-depth ethnographic fieldwork will be very familiar to readers with a background in Anthropology Political and legal anthropologists, especially those working with fraught social issues, will likely consider Macías-Rojas research design a model of exceptionally solid empirical work."--Polar Journal

"From Deportation to Prison provides a fascinating and original view of the day-to-day workings of the immigration detention system, based on fieldwork, interviews, and archival research conducted over a 10 year period. An exciting and high-quality work."--Susan Bibler Coutin, author of Nation of Emigrants