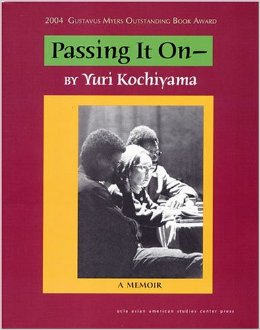 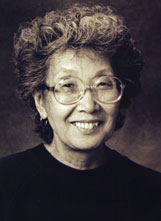 Passing It On - A Memoir by Yuri Kochiyama is the account of Kochiyama (1921-2014), an extraordinary Japanese American woman who spoke out and fought shoulder-to-shoulder with African Americans, Native Americans, Latinos, Asian Americans and whites for social justice, civil rights, and prisoner and women's rights in the United States and internationally for more than half a century. A prolific writer and speaker on human rights, Kochiyama has spoken at more than 100 colleges, universities and high schools in the United States and Canada.

"This is my grandmother's memoir. It expresses the primary values and themes that have guided and directed her life, and it describes some of the struggles, movements, moments, and people that have most significantly inspired her to become the person that she is today." - Akemi Kochiyama-Sardinha.

This memoir received the Gustavus Myers Outstanding Book Award for 2004. The award honored "authors and books that challenge ways of thinking and acting, that allow the many faces and facets of bigotry to replicate over and over again," according to Loretta J. Williams, former director of the Gustavus Myers Center for the Study of Bigotry and Human Rights.