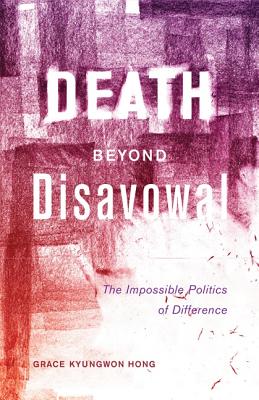 Death Beyond Disavowal: The Impossible Politics of Difference

Death beyond Disavowal utilizes "difference" as theorized by women of color feminists to analyze works of cultural production by people of color as expressing a powerful antidote to the erasures of contemporary neoliberalism.

According to Grace Kyungwon Hong, neoliberalism is first and foremost a structure of disavowal enacted as a reaction to the successes of the movements for decolonization, desegregation, and liberation of the post-World War II era. It emphasizes the selective and uneven affirmation and incorporation of subjects and ideas that were formerly categorically marginalized, particularly through invitation into reproductive respectability. It does so in order to suggest that racial, gendered, and sexualized violence and inequity are conditions of the past, rather than the foundations of contemporary neoliberalism's exacerbation of premature death. Neoliberal ideologies hold out the promise of protection from premature death in exchange for complicity with this pretense.

In Audre Lorde's Sister Outsider, Cherríe Moraga's The Last Generation and Waiting in the Wings, Oscar Zeta Acosta's The Revolt of the Cockroach People, Ana Castillo's So Far from God, Gayl Jones's Corregidora, Isaac Julien's Looking for Langston, Inge Blackman's B. D. Women, Rodney Evans's Brother to Brother, and the work of the late Barbara Christian, Death beyond Disavowal finds the memories of death and precarity that neoliberal ideologies attempt to erase.