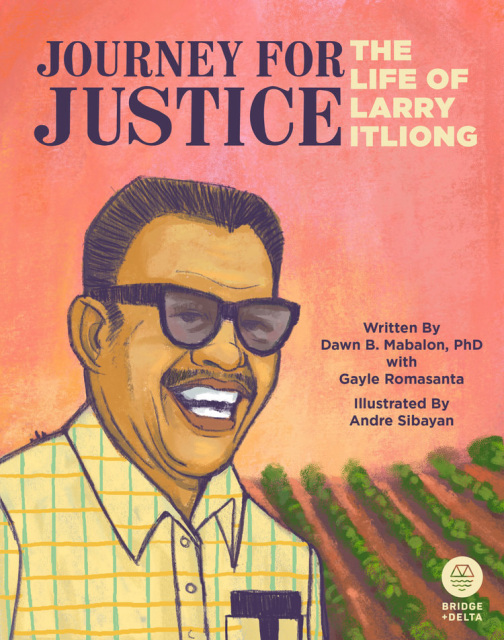 Journey for Justice: The Life of Larry Itliong

This book, written by leading Filipino American historian Dawn Bohulano Mabalon, PhD with writer Gayle Romasanta, richly illustrated by Andre Sibayan, tells the story of labor leader and co-founder of the United Farm Workers Larry Itliong's lifelong fight for a farmworkers union, and the birth of one of the most significant American social movements of all time, the farmworker's struggle, and its most enduring union, the United Farm Workers. This is the first book written about Larry Itliong and the first nonfiction illustrated Filipino American history book for children.

Sold out
Add to Cart
Description. This children’s book, written by historian Dawn Bohulano Mabalon, Ph.D. and Gayle Romasanta, and richly illustrated by Andre Sibayan, tells the story of often forgotten United Farm Workers Union cofounder, Larry Itliong, his migration to the United States, and his lifelong fight for a farmworkers union. This is the first nonfiction illustrated children’s book about Filipino American history and the first book written about Larry Itliong.

Author Dawn Bohulano Mabalon, PhD, is a third-generation Pinay (Filipina American) born and raised in Stockton, California, and the descendant of farmworkers and teachers. She received a BA in history and an MA in Asian American Studies from the University of California, Los Angeles and a doctorate degree in American history from Stanford University. Before her untimely passing on August 10, 2018, she was a professor in the department of history at San Francisco State University, a co-founder of Little Manila Rising in Stockton and a board member and National Scholar of the Filipino American National Historical Society. She is the author of several articles, essays, poems, and books, including “Little Manila Is in the Heart: The Making of the Filipino American Community in Stockton, California” (Duke University Press, 2013) and the first book about Larry Itliong, “Journey for Justice: The Life of Larry Itliong” (Bridge and Delta Publishing, 2018).

Author Gayle Romasanta was born in Manila, Philippines, and raised in Stockton, California. She is a graduate of the Master of Fine Arts writing program at California College of the Arts. Her work as a writer and editor has spanned over 20 years, with her work published in newspapers, literary journals, magazines, and books. She founded Kappa Psi Epsilon sorority, a Filipino culture-based organization, over 20 years ago with chapters statewide at UCLA, UC Davis, CSU Long Beach, CSU Sacramento, and San Francisco State University. She is also the author of the English and Tagalog children’s book, “Beautiful Eyes” (Meritage Press, 2012). Currently she is the publisher/owner of Bridge and Delta Publishing, an independent publishing house focused on Filipino American storytelling.

​Illustrator Andre Sibayan: Andre Sibayan is an illustrator and designer, born and raised in the San Francisco Bay Area. His work has been featured in major national and international magazines, retail brands, kids apparel, and various food, beverage, and hospitality branding projects. Growing up on comics, anime, and Saturday morning cartoons has given him an affinity for creating art for the young and the young at heart.