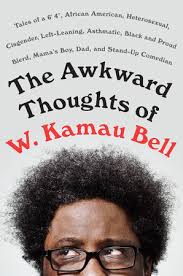 You may know W. Kamau Bell from his new, Emmy-nominated hit show on CNN, United Shades of America. Or maybe you’ve read about him in the New York Times, which called him “the most promising new talent in political comedy in many years.” Or maybe from The New Yorker, fawning over his brand of humor writing: "Bell’s gimmick is intersectional progressivism: he treats racial, gay, and women’s issues as inseparable."